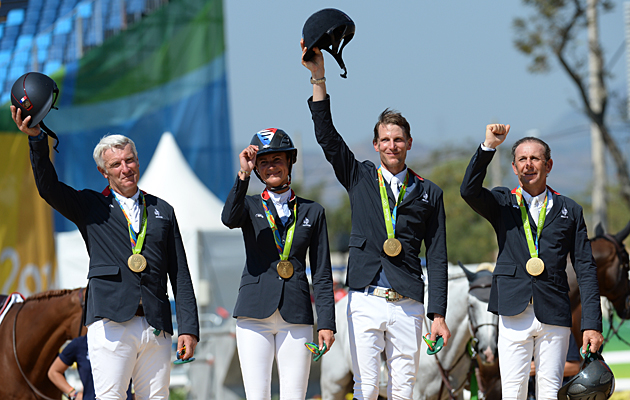 France added yet another team gold to their tally today, winning the team showjumping competition at the Rio Olympics after their eventing victory last week. The USA took silver, with Germany narrowly claiming the bronze after a jump-off with Canada.

France started the day in fifth with one time-fault on their scorecard after yesterday’s first round, but Philllippe Rozier (Rahotep De Toscane), Kevin Staut (Reveur De Hurtebise) and Roger Yves Bost (Sydney Une Prince) all left all the coloured poles intact today. A single time-fault each for Phillippe and Roger didn’t matter and they secured the gold on three faults without final ride Penelope Leprovost (Flora De Mariposa) having to jump.

The French team take gold in the showjumping at the Rio Olympics. Picture by Peter Nixon

The USA were down to three riders today as Beezie Madden’s Cortes ‘C’ sustained a tendon injury yesterday, but Kent Farrington (Voyeur) had just one time-fault, McClain Ward (Azur) jumped clear and Lucy Davis (Barron) had four faults. This left them on five faults with second place.

“I saw a lot of horses struggle to jump the treble clear and we knew every rail down would count today, so I really set him up for that,” said Kent. “I wanted to secure that before I took risks on the time.”

The Netherlands and Brazil started the day in equal first with the USA and Germany, but faults dropped them out of the reckoning. Canada came up the rankings to end up in a jump-off with Germany for the bronze medal, with both teams sitting on eight faults.

All four riders can come forward in an Olympic jump-off, but in the event Germany secured the medal after their first three riders, Christian Ahlmann (Taloubet Z), Meredith Michaels-Beerbaum (Fibonacci) and Daniel Deusser (First Class), jumped clear. Ludger Beerbaum (Casello) did not need to come forward.

Canada’s Yann Candele (First Choice 15) and Amy Millar (Heros) both had a fence down, so although Tiffany Foster (Triple X III) went clear, Germany had the medal in the bag.

Full 20-page report from the Olympic showjumping in Rio in the issue of H&H published Thursday, 25 August, including full analysis of every round of the competition and expert comment from Geoff Billington and William Funnell.