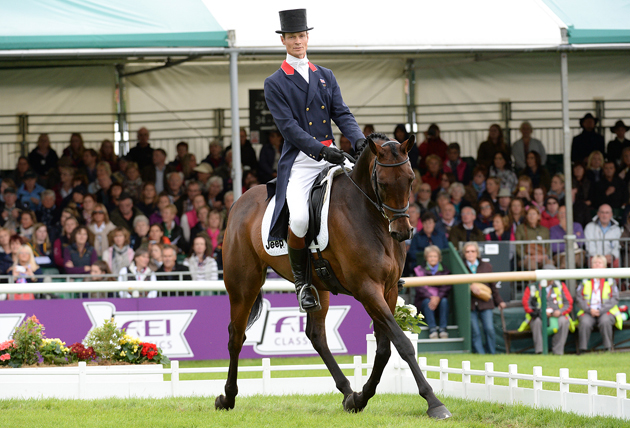 The 11-year-old by Ard VDL Douglas, who belongs to Carol Gee and Catherine Witt, scored 34.2 and he is sharing pole position with last night’s leaders, Germany’s Michael Jung and the Kentucky winner FischerRocana FST.

Pimms’ scores were only marred by a mistake in the first flying change; otherwise his test was spot on.

“It’s his first time doing the four-star test in a competitive arena and it’s a big step up, so you have to admire a horse who takes that challenge and handles it so well,” said William.

He added that he does not necessarily expect the horse to go clear inside the time over Mark Phillips’ cross-country course tomorrow.

“It’s a big step up and I think he is ready, but you never really know until you ask the question,” he said. “I just want him to go well and show me he’s a good horse for the future.”

“I’ve looked at all the long routes, but don’t plan to take any at the moment,” he said. “Pimms is a brave horse and very able, but he’s green and can be cheeky. The first three fences are the only nice ones as far as I’m concerned. If a tricky fence comes early, Pimms can be exuberant and have his own opinions.”

Australians hold third and fourth. Andrew Hoy, second last night on Rutherglen, now sits in fourth, while Sam Griffiths was the best rider in the final session today to claim third with the seasoned campaigner Happy Times on 36.8.

“He’s always been very consistent, but he really pulled out all the stops today,” said Sam. “I always knew he could get that sort of mark and I’m glad he was able to do it today.”

Sam agreed with William’s assessment that the course is difficult.

“It’s one of the toughest I’ve seen for a long time,” he said.

Oliver Townend has bagged another top-six place for Britain with equal fifth on Armada, whose marks only dropped down in the walk section.

Oliver shares the spot with New Zealand’s Tim Price and Ringwood Sky Boy, who presented an elegant test to be best of this morning’s combinations.

The top nine scores are all in the 30s. Michael Jung’s test today was not quite what he might have hoped for with La Biosthetique-Sam FBW, although he claimed to be pleased — the horse was late behind in the first flying change and seemed reluctant to rein-back.

He is equal seventh on 39.2, while fellow German Niklas Bschorer (Tom Tom Go 3), who was third overnight, shares that score.

Coral Keen is winning the battle of the H&H bloggers, sitting 45th on 51.7. But she had a disappointing time when Wellshead Fare Opposition was tense in the arena and she couldn’t ride for the maximum marks they are capable of scoring.

By contrast Nana Dalton was over the moon with Elite Syncopation (51st on 53.6). Simon Grieve, who rode yesterday, now holds 60th on 55.4.

Tomorrow’s cross-country starts at 11am.

Video interviews with riders about the course

Times and scores
Full report from Burghley in next week’s H&H, out Thursday, 10 September — 17 pages of photos and analysis, including columns from Ruth Edge, Lucy Wiegersma and Mark Phillips.