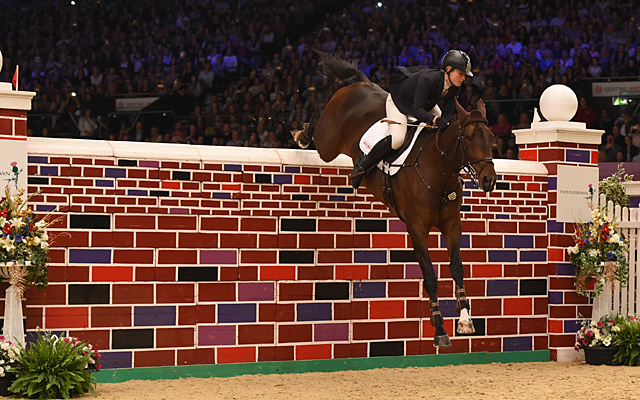 Holly Smith has won the 2016 Horse of the Year Show (HOYS) Puissance riding her own and James Mossman’s eight-year-old gelding, Quality Old Joker.

“I wasn’t going to enter him in this class, but after our near-miss in the Foxhunter final I thought ‘why not’ and went for it,” said Holly who was third in the Foxhunter, a class she looked set to win, clocking up the fastest time by three seconds, only to have an unlucky pole, dropping her to third on this horse.

Holly and ‘George’ were the only combination to jump clear in the fifth and final round over an impressive height of 2.20m (7ft 3ins) in what was the combination’s only third ever Puissance competition.

“I’ve never had a horse that I thought was capable of it before,” explained Holly. “I knew George was good, but I didn’t want to ram the idea down his throat. I’ve watched the class for years on TV and always fancied having a go at it, and when I was watching it on the CCTV in the collecting ring before I went in I said to my groom, Emma, “I feel like I’m at home watching it on telly!”

Holly said that the first three rounds were a breeze but the fourth round at 2.10m didn’t quite go to plan.

“It was great to begin with and then it got a bit scary,” laughed Holly. “I was a bit quick down to the wall in the fourth round — I though ‘what am I doing?’ and he rubbed it, so I knew in the final round I had to slow it down a bit and keep George’s belly up — I couldn’t see above or over the wall!”

“George has an honest, but what was at the time, ugly head,” explained Holly. “It was the first time Graham had gone out to buy me a future showjumper and he came back with this ugly thing! But he is a pony in a horse’s body and is rideable and a real gentleman.”

“I can put him on the lorry and can pull him out for any class,” said Holly. “He can do grands prix, speed classes and a puissance, but my sister will take over now to do some under-23 Olympia qualifiers.”