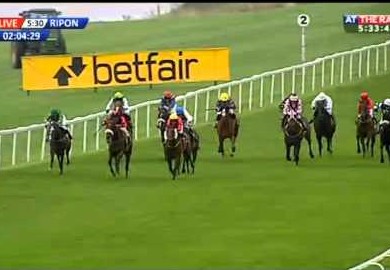 Victoria took part in a 1m2f amateur race at Ripon aboard the Lawney Hill-trained Royal Etiquette. The pair were narrowly beaten by just a head by 33-1 shot Jordaura, ridden by Tom Greenwood.

“Today was unique,” she said. “I didn’t expect to be out at the front or to place, I just wanted to finish safely.

“It’s given me confidence and I feel blessed to have been given this chance, I feel like a real jockey.”

The Olympic gold medal-winner, and nine-times world champion, took up riding in March as part of a challenge set by Betfair.

The aim was to secure a category A licence, and yesterday she took to the track for the first time in an amateur race.

Her first foray onto a racecourse was in July at Newbury, where she finished down the field.

The race at Ripon was much more successful with Victoria putting in a strong performance to finish second. She hit the front three-furlongs out on the eight-year-old gelding but was just caught in the finish.

The aim now is to ride in point-to-points from November with the ultimate goal of riding in the Foxhunter at the Cheltenham Festival in March.

In the past few months she has progressed from complete beginner to schooling and riding out with trainers including Paul Nicholls and Lawney Hill.

“It is an audacious challenge, but I want to push myself and I have enjoyed it so much so far. I have been overwhelmed with the support and I have faith in the people training me. I know Yogi wouldn’t take me to a level in training he didn’t think I was capable of,” Victoria told H&H earlier this year.

“I feel honoured to work with someone like Yogi, he’s so insightful of both horse and rider and has a very good way of delivering his coaching.”

Video courtesy of At The Races.