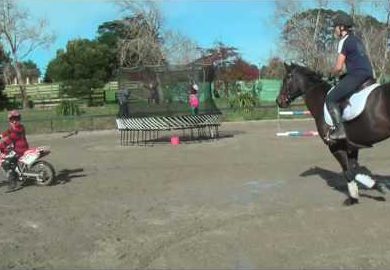 A seller in New Zealand has been answering potential buyers’ more bizarre questions through hilarious videos.

She also sells nationally and overseas, and sometimes is asked to share videos of horses doing certain things by potential customers.

“Normally I expect these things to be lateral work or jumping a particular height, but a few weeks ago I was asked to show a horse standing while wearing his rug, in winds of up to 90kph to show that he didn’t mind extreme winds and flapping pyjamas,” Karen told H&H.

“I thought this was hilarious and my mind started to wander as to how I could do this. So I did a tongue in cheek video to show this four-year-old horse standing wearing flapping pyjamas in ‘extreme winds’ [fans and a hairdryer].”

Since then Karen has received questions about a mare she has for sale, Nouveau Heights BHS (Pumba).

“I kept being asked what she’s like with children,” said Karen.

“I can understand this question as a mother of four myself — you want your kids to be safe if they suddenly dart out in front of your horse or run up behind it — but again my mind started to wander to the humorous side of this and as to how ridiculous I could go.”

The video shows Pumba being put through her paces, while children jump up and down on a trampoline, play football and drive a trials bike in the same arena.

“I thought the video would get about 20,000 views and a few horsey people might laugh. I posted it at night before I went to bed and when I woke up in the morning, I checked Facebook and saw it had had nearly 500,000 views. I nearly fell out of bed.”

“Thanks to this last video, I have been asked how she is with two further things and so two more videos are currently in the planning stages. I think they are even more ridiculous.”

Pumba is still for sale but Karen is said she is reluctant to part with her.

When we asked you what the strangest questions

Do you miss the water fights and musical

“She is named after the character in The Lion King as she suffers from the ‘too voluptuous gene’,” said Karen.

“She is by my stallion Mighty Heights who I rode to advanced eventing and 1.60m showjumping. He is well known in New Zealand for his sane temperament.

“He broke into my house one morning and we thought it was an intruder and he was standing in the kitchen knocking things casually off the bench and watching them land on the tiles.”