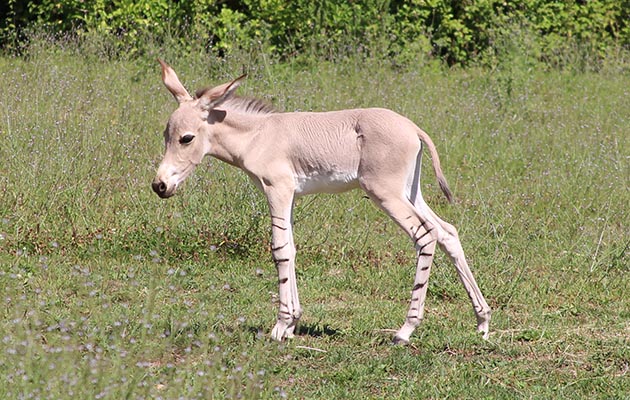 One of the world’s rarest animals has been born at Marwell Zoo.

Both the nine-year-old, who was born at the zoo herself, and her baby are reported to be happy and healthy.

Keepers don’t yet know the sex of the foal, as they are allowing Nadifa and her baby some time to bond.

The latest arrival is a second foal to be born at Marwell for Nadifa, who previously gave birth to a female in 2013.

The youngster’s sire, Lars, arrived from Safari de Peaugres in France in April last year and it is the first time he has been used for breeding.

“This is a great achievement for Marwell. We are one of only three collections in the UK holding a breeding herd of African wild ass, which makes the foal’s arrival so important. We are all really proud to see this wonderful new addition doing so well,” said the zoo’s animal collection manager Ian Goodwin.

The birth is a significant boost for the species, which has been on the critically endangered list since 1996. There are thought to only be 600 examples still surviving in the wild today.

The remaining herds inhabit the remote and harsh environments of Eritrea and Ethiopia, while it is unknown if any of the asses still exist in neighbouring Somalia.

The mare, who was rescued from horrific conditions last autumn, has given birth to a healthy filly

The species, which is thought to be the ancestor of the domestic donkey, formerly had a wider range north and west into Sudan, Egypt, and Libya.

Well-adapted to desert conditions, the Equus Africanus stands between 12.1hh and 14.2hh and can go for up to three days without water.

Marwell has long been central to the conservation of this special breed, foaling the first-ever British born African wild ass in 1996.