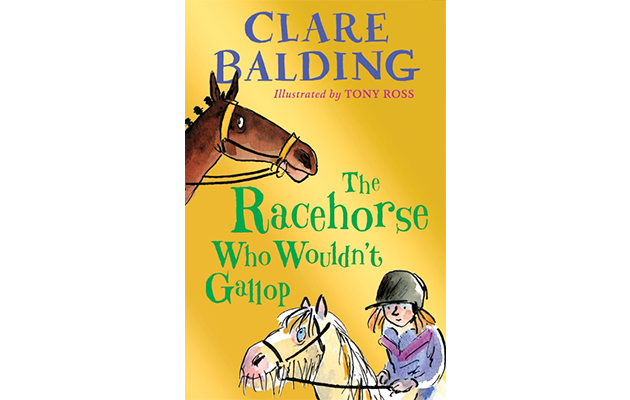 Clare Balding has released a book that centres on a horse-mad 10-year-old with big thighs.

“The Racehorse Who Wouldn’t Gallop” is the presenter’s first children’s novel.

The plot follows the adventures of a girl called Charlie who dreams of owning her own pony and is thrilled when she accidentally manages to buy a racehorse.

The horse she buys, Noble Warrior, looks the part, but there is one problem — he won’t gallop.

In fact, he won’t even leave his stable without his best friend, a naughty palomino pony called Percy.

Charlie is convinced Noble Warrior has what it takes to be a champion.

The story follows the build-up to Derby day, when only a win can save the family farm from being repossessed.

“The stakes couldn’t be higher,” reads the blurb. “Can Charlie turn her chaotic family into a top training team? Can Noble Warrior overcome his nerves? Will Percy the pony ever stop farting?”

Clare hopes that the novel will help children feel more positive about their bodies.

She said she “always wanted a heroine with big thighs” in an interview with Woman&Home.

“There are not enough of us in the world!” she said.

“I’m very aware of the body image issues that young girls face so I wanted to include a positive message in my children’s novel.

“One that says ‘It’s not about how your legs look, it’s about what they can do for you’.”

Clare added that she would like to write a series of children’s books in the future.

“I wanted to create a book my nephews and my niece would enjoy reading, so the decision to write fiction for children rather than adults was because of them,” she said.