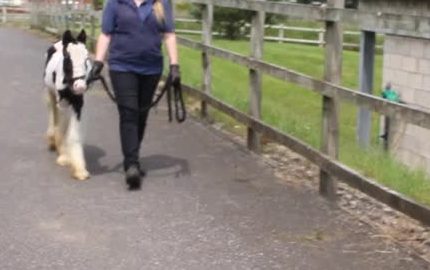 A pony found “being eaten alive” by maggots is making good progress following his rescue.

The youngster, now named Buggy, was one of a group of ponies recently found in Hillam, Yorkshire.

World Horse Welfare and the RSPCA were called to the animals by a member of the public who realised they needed help.

“As I walked over to the pony, the smell was absolutely putrid even from six feet away,” said World Horse Welfare field officer Sarah Tucker.

“I could hear the maggots making a ‘crackling’ sound as they burrowed through his skin. It was like his skin was moving as he was so covered in them and he understandably looked very uncomfortable and dejected.”

A vet, RSPCA inspector Claire Mitchell and police arrived and the horses were removed under the Animal Welfare Act.

“Given that Buggy was in such a terrible state, he was travelled to the Minster Equine Veterinary Clinic in York where he was put on a drip and received urgent treatment to clear his skin of the maggots,” a spokesman for World Horse Welfare said.

The foal was very thin and suffering from “extensive skin damage” from the maggots, as well as the lice infestation and worms.

‘Beginning to look a little brighter’

“He is beginning to look a little brighter after his ordeal,” said a World Horse Welfare spokesman.

The youngster has been very popular with the charity’s supporters since his rescue.

“Buggy is getting quite the fan club — so many of you have reached out to us to see how he is doing,” added the spokesman.

“He is continuing to progress and is developing into a real character. He even met supporters for members’ day at World Horse Welfare Penny Farm.”

Chloe Atkins, the member of the public who alerted World Horse Welfare to Buggy’s plight, has been inspired to do a sponsored walk to raise money for his rehabilitation.