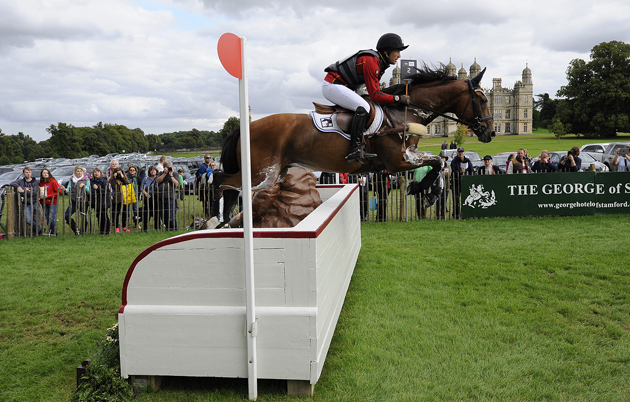 Although he fell in the water with his first horse, FischerRocana FST, Michael rode with his customary brilliance on La Biosthetique-Sam FBW to bring him home just 2sec over the 11min 12sec optimum time. He is 1.5 penalties ahead of his nearest rival.

The 15-year-old Sam belongs to the Jung Family, Michael’s father Joachim, Erich Single and the German Olympic equestrian federation (DOKR). He has won the individual golds at the Olympics (2012), World Championships (2010) and European Championships (2011).

“After I fell with Rocana I went back to the stables and my brother said I had to start really fighting with Sam — that he had been in seventh and was now in sixth,” joked Michael.

“I know Sam very well. In the beginning we were a bit slow up the long hill for fence 13 [the Cottesmore Leap], but after that I wanted to catch the time and he was really fighting for me.”

New Zealander Tim Price holds second on Ringwood Sky Boy, a 12-year-old belonging to Varenna Allen, Robert Taylor, Selwood.com and the rider. He had 2.8 time-faults today to move up from fifth after dressage.

Tim had an unusual incident when a wasp got inside his cross-country shirt during his round.

“After Discovery Valley I had a scratchy sensation, like a thistle, so I tried to adjust my shirt but it wouldn’t go away,” he said. “When I finished I felt it again, so I lifted up my shirt and a little wasp flew away. I think he was a bit annoyed by the whole experience!”

Speaking about Ringwood Sky Boy, Tim said: “He’s not the most conventional, but he has a lot of scope and honesty and tries hard and that stands him in good stead. The combinations can be difficult because he has a long stride and really wants to get there. It was a course where you had to use feel and make choices along the way.”

Ringwood Sky Boy does not have a great record in the showjumping, so he may well drop out of the top echelons tomorrow.

Only two riders made the time today — Tim’s wife Jonelle Price was one and is now third on Trisha Richards’ Classic Moet, also the fastest horse at the World Equestrian Games last year.

“She’s a fast one and I just have to keep up with her,” said Jonelle. “She gave me a fantastic ride and was pretty faultless from start to finish.”

The other speedy rider was Australia’s Christopher Burton, who sits fourth with British Open champion TS Jamaimo. Christopher is also fifth on Haruzac.

Oliver Townend is the best Brit in ninth on the pathfinder, Dromgurrihy Blue. Tina Cook is 10th with Star Witness. Both horses are four-star debutants.

Course-designer Mark Phillips said he was “very happy and relieved” by the result. The course had been turned round to run in the opposite direction this year and Mark said this is an expensive exercise, so it will keep flowing this way for a few years now.

The two overnight leaders, Michael Jung on his first ride FischerRocana FST and William Fox-Pitt on the inexperienced Fernhill Pimms, both left the sharp end in dramatic fashion.

FischerRocana jumped fence 4a, the wall before the slope down into the water at the Lion Bridge, but lost her footing as she entered the water and went down, soaking herself and Michael.

William Fox-Pitt was having a great round with the young Pimms, but the pair were held before Thomson’s Wall (fence 23) because the back of the fence was broken.

When they restarted, William decided to take the long route at Discovery Valley, fence 24ab. He jumped the chest at 24a, then set off along the track to the Elephant Trap at fence 25. But he suddenly realised his error, turned round and galloped back to Discovery Valley to jump fence 24b.

William could have been 14sec over the time and held his lead, but 51sec was expensive and his 20.4 time-faults dropped him to 13th overnight.

At the end of the day, both Sam Griffiths (third after dressage) and Oliver Townend (fifth) could have taken the lead, but they made late errors on course.

Sam ran out at the second hedge at Discovery Valley (fence 24b) with Happy Times, while Oliver had 20 penalties at the sculpted hedge oxer in the Land Rover Trout Hatchery with Armada.

Earlier in the day, Andrew Hoy and Rutherglen, fourth after dressage, had a fall at Capability’s Cutting (fences 9 and 10).

Our third blogger, Coral Keen with Wellshead Fare Opposition, fell at the Cottesmore Leap. She was taken to hospital for precautionary X-rays.

Full report from Burghley in next week’s H&H, out Thursday, 10 September — 17 pages of photos and analysis, including columns from Ruth Edge, Lucy Wiegersma and Mark Phillips.