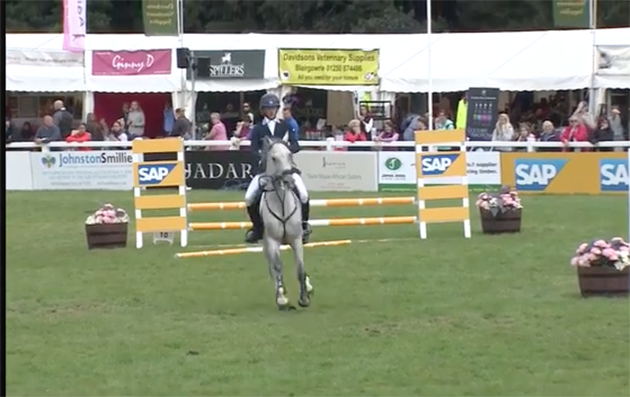 But the feat he pulled off at the Blair Castle Equi-Trek International Horse Trials today (27 August) was a first for the young Swede.

Ludwig was riding El Kazir SP in the Event Rider Masters class, when the pair had a misunderstanding about the take-off point for the yellow upright at fence 10. The grey chipped in an extra stride and then blundered through the fence, throwing Ludwig up his neck.

It looked momentarily like the rider would fall off, but he managed to right himself — only to find that somehow, the horse’s bridle and ear covers had slipped over his ears. The ear covers fell to the floor but the bridle was left dangling from the horse’s nose by the noseband, which was still done up.

Unwilling to give up, Ludwig managed to lean forward and grab the bridle with his left hand and then use both hands to replace it in position while El Kazir SP trotted around. He then continued his round.

“I wanted to carry on — he’s a new horse for me and I felt he should have taken off [on the first stride], but I’m not used to him and he’s not used to me,” said Ludwig. “He’s a bit spooky and not that secure in the ring, so he needed not to finish on that note. He’s a nice horse, he just needs more confidence in the ring.”

Sadly in the course of the operation, Ludwig racked up 31 time-faults, as well as 12 jumping faults (four for the initial fence down, four for circling away from fence 11 and four for then having fence 11 down). Lying 29th, he decided to withdraw before the cross-country phase.

This wasn’t the only tack malfunction at Blair over the weekend.

Alex Postolowsky’s one-star ride Denver VIII managed to lose his bridle as he was leaving the dressage arena after the final halt.

The bridle was left hanging from the nine-year-old’s nose and ground jury member Sue Stewart, who was sitting at B, leapt out of her car to replace it for Alex.

CCI3* pathfinder Michael Owen also had to pull up Jims Pal a third of the way round the cross-country when his bit broke.