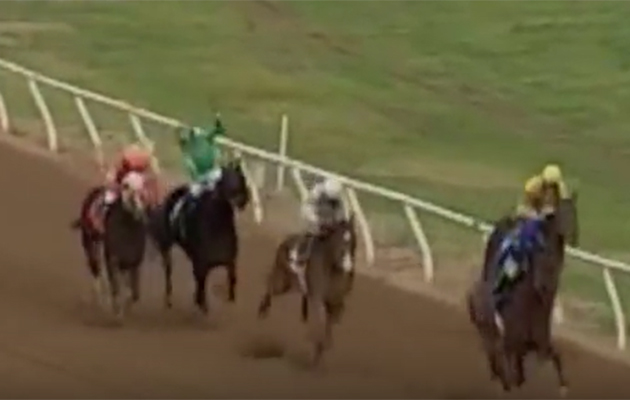 It is not unusual for jockeys to be banned for use of the whip — but less common for a rider to use one on a fellow jockey.

A race in the USA became very heated between two jockeys, resulting in one of them whipping her rival in the home straight.

The argument happened during a Flat race at Will Rogers Downs racecourse in Oklahoma.

Turning for home, the pair looked to be fighting for space and Freddy Jose Manrrique-Guerrero, riding Oliver G, appeared to elbow Natalie Turner.

The lady jockey, aboard War Chirp, reacted by attempting to strike Freddy Jose three times with her whip.

The altercation did little to boost their chances and Natalie finished in fifth, with Freddy Jose behind in sixth.

Natalie has not yet been sanctioned, however Freddy Jose — who initially elbowed Natalie — received a 30-day ban from the stewards and ordered to attend an anger management course. A punishment the jockey did not dispute.

The in-race comments read that “War Chirp was placed in tight quarters entering the top of the stretch exchanging light contact with Oliver G and coming close to that one’s left-handed whip, attempting to strike that rival with the whip appearing to make contact on at least once occasion, then went evenly.

“Oliver G crowded War Chip a bit leaving the turn and was put to a left-handed whip in very close quarters to that rival, then finished up evenly.”

In 2015, two other jockeys in the USA were involved in a whip scandal when Angel Castillo and Pierre Hernandez Ortega were caught up in a mid-race dispute. Having lost his whip, Angel leaned over and stole Pierre’s whip from his hands before finishing second.

This side of the Atlantic, Lester Piggott — after dropping his own whip during a race at Deauville — famously grabbed one off rival Alain Lequeux. Lester was demoted from second to third by the French stewards.