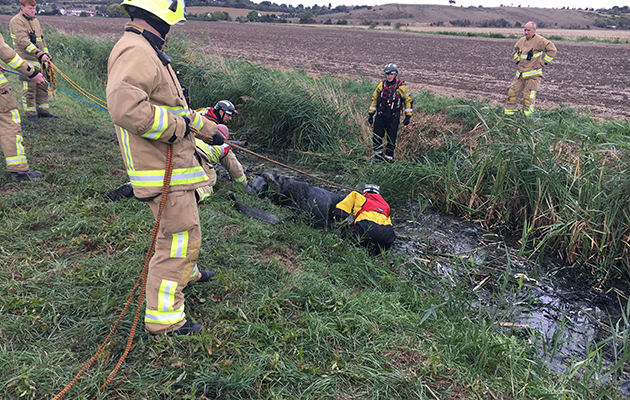 Firefighters worked in waist-deep sewage to rescue a pair of horses who had become submerged in ditch last week.

The fire service pulled two colts out of a sewage-filled ditch in a remote location in Essex on 8 October after a dog walker reported them stuck.

They were found up to their necks in mud, having slipped down a steep bank.

RSPCA inspector Marie Hammerton,who joined the emergency services at Ford Road in Tilbury, said the colts were exhausted by the ordeal.

“They were absolutely submerged, only their heads were sticking out from the thick mud. It was very worrying,” she said.

The ponies were taken to House and Jackson veterinary hospital in Blackmoor for a much needed bath.

Vets at Essex’s only equine hospital have named the six-month old ponies Jammy and Dodger.

Both are expected to make a full recovery, but are still a little nervous.

If nobody comes forward to claim the ponies by the weekend they will be taken to an RSPCA centre for rehoming.

“We don’t know if these two young ponies were abandoned, however we have yet to have anyone to come forward to claim them,” said Inspector Hammerton.

The ponies had been roaming around the area without any fencing or form of identification.

“I’d like to thank Essex Fire and Rescue and all the team that came out to this rescue, especially when it involves them getting waist-deep into a sewage-filled bog,” said Inspector Hammerton.

Anyone with any information about the horses is asked to call the RSPCA inspector’s appeal line on 0300 1238018.