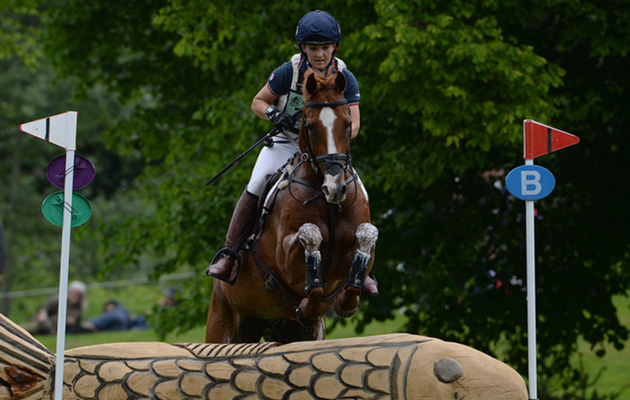 The pair topped the under-25 CCI3* here last year on their first run at the level, going on to make their senior squad debut at the European Championships at Blair Castle.

Today they cruised home four seconds inside the optimum over Ian Stark’s course to finish the day on their dressage score of 40.

“It’s always amazing to come back here — it’s my favourite event and ‘Luke’ clearly likes it here,” she said. “He was great from the start to the finish.”

If Holly can win this class tomorrow, she will have laid down a serious marker ahead of the Rio 2016 Olympics as this is an important selection trial.

Gemma Tattersall had a foot-perfect round inside the 6min 28sec optimum time on Christopher Stone’s Chico Bella P to move up from fourth to seecond. Gemma also went clear with Quicklook V, incurring just two time-faults to sit fifth.

“They galloped within themselves and jumped out of their stride,” she said. “I didn’t have any dodgy moments anywhere with either of them.”

Tina Cook added nothing to her sixth-placed dressage score of 43.1 with Elisabeth Murdoch’s Billy The Red to rise to third and she has a second horse in the top 10 as she also sits 10th on Calvino II, another who was clear inside the time.

“They are both young horses and I’ve been prepping them this year in the hope they might be Rio horses — I kept them busy last year getting their qualifications, then this year I’ve been waiting for the good ground to run them more quickly and today was their day to shine,” said Tina. “I am pleased with both of them — they are fab horses to ride.”

Australia’s Paul Tapner is the best non-British rider in fourth on Yogi Bear VIII, who was also penalty-free.

Among other riders in contention for the British team, Kitty King had 2.8 time-faults with Ceylor LAN, who slipped from third after dressage to sixth. Pippa Funnell and Billy The Biz’s two time-faults dropped them one place to eighth.

Nicola Wilson had a fault-free round on One Two Many (ninth), while William Fox-Pitt also enjoyed a jumping clear with Chilli Morning, incurring 5.2 time-penalties to sit 12th.

The dressage leader in this class, Germany’s Pia Munker on Louis M, withdrew before the cross-country.