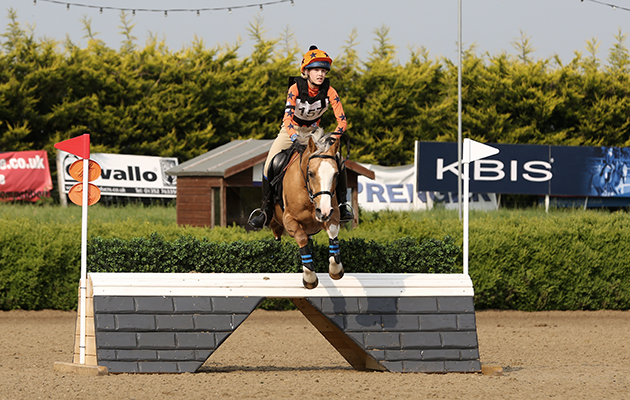 Honor Gordon and her eye-catching palomino Made Of Gold have held their place at the top of the leaderboard after cross-country in the 90cm section of the Horse & Hound Festival of Eventing.

The 13-year-old rode a well-judged round to finish just one second over the optimum time of 6 minutes 46 seconds, adding 0.4 time penalties to their dressage of 27.25.

Keysoe’s course, designed by Angus Smales, rode well, with a smattering of problems throughout.

A total of 42 out of 50 combinations jumped clear, but the majority of riders picked up time faults.

Honor, who was celebrating with a Chinese takeaway, said she was excited ahead of tomorrow’s showjumping phase.

“We’ve just got to leave the jumps up,” she smiled.

“I was worried about the brush coming out of the water and the log pile at fence six as it was quite big and she only has little legs.”

Entries are filling up quickly for the Horse & Hound Festival of Eventing in association with KBIS, so it’s time

Honor has been riding the 14hh mare for two years and enjoys all Pony Club activities, but eventing is their favourite discipline.

While the time proved influential, there remains little room for error and less than two poles separate the top-16 cominbations.

Honor has less than a fence in hand over second-placed Celia Bellamy and Toptime Taliesin, who added 0.8 time penalties to their dressage score for a two-phase total of 29.05. In third is Sarah Nicholls with CSH Sioux on 30.5.

The showjumping phase of the Bedfordshire event, run in association with KBIS, starts at 9.30am for the 70cm section, with the 90cm class set to start at 1.35pm.

The full report from the H&H Festival of Eventing in Horse & Hound will be in this week’s issue of the magazine — on sale Thursday, 7 June and follow online at www.horseandhound.co.uk