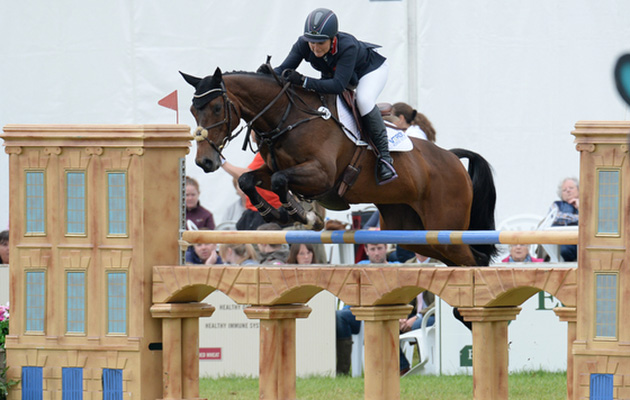 She jumped a clear round on Christopher Stone’s Chico Bella P to move up from second overnight.

Earlier, Gemma had had the first fence down on her first horse, Quicklook V, who slipped from fifth to seventh, but she said it did not affect the way she rode Chico Bella P.

“Quicklook was slightly distracted by someone shouting — it’s very unlike her to have a fence and she certainly said sorry all the way round, she wasn’t going to touch another one,” said Gemma. “Chico Bella P was amazing, she’s such a trier.

The class was an important selection trial for the British team for the Rio 2016 Olympics and eight of the top 10 placings went to the home side. But the showjumping shuffled the order significantly.

Holly Woodhead was the leader after yesterday’s cross-country, but she and DHI Lupison had three down today and dropped to eighth.

A clear round also elevated Tina Cook one place to second with Elisabeth Murdoch’s Billy The Red.

“He’s been progressing all year,” said Tina. “I think a lot of him and I’m thrilled to be second.”

Pippa Funnell moved up five places to take third with a fault-free performance from Carol Toliver’s Billy The Biz.

“We’re all riding with a bit of pressure because we all have the same dream, but I’m really pleased with my horse’s perforamnce. He’s come on a huge amount as he came to the sport quite late,” said Pippa.

Kitty King (Ceylor LAN) rose from sixth to fourth with a single time-fault, while New Zealand’s Tim Price had two time-penalties to move up from seventh to fifth with Bango.

Nicola Wilson’s clear on One Two Many elevated her three places to sixth and it was the same story for William Fox-Pitt and Chilli Morning, who finished ninth.

Australia’s Paul Tapner rounded out the top 10 on Yogi Bear VIII, who had the front rail off the oxer at fence 5c and also knocked the second part of the final double.

Full report from Bramham in H&H next week, out 16 June.