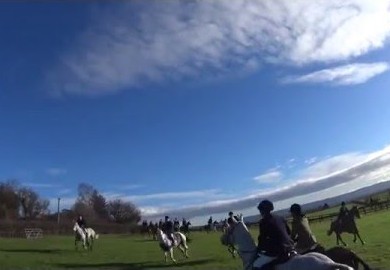 Event rider Alice Pearson is recovering from a crashing fall out hunting.

Alice was out with the Ledbury at Murrells End last week (15 January) when the horse she was riding, Chocky, fell at a hedge.

Chocky landed on Alice and she was knocked unconscious for 30 seconds.

“I’m quite lucky as it could have been a lot worse.

“I took a pull and shouldn’t have done that, he [Chocky] knew what he was doing.

“A friend came over and dealt with me really well and I saw a paramedic.”

“Chocky is so tough, he is fine,” said Alice. “He was really perky the next day.”

Alice was wearing a hat camera and captured the fall in a video.

The accident was also caught on camera by photographer Viki Ross and several horses can be seen landing inches from Alice and Chocky.

Alice is now warning others to take care not over-crowd fences out hunting, to avoid a more serious accident in the future.

“David said there’s no line round here, just jump wherever you want, but people don’t, they just follow the leader,” Alice said.

“I know I had followed David, but I was right at the front. If you see a lot of people in front you do want to avoid them.

Event rider Alice Dunsdon, joint-master of the Surrey Union and friend of Alice Pearson, stressed the importance of giving fellow riders enough room when jumping fences to avoid landing on a faller.

“I am forever telling my field to give each other more room and do not bunch.

“I know it is difficult as horses like to stick together. Sometimes we have two field masters out if you have more than 40 or 50 riders so that we can make sure riders are spreading out.”