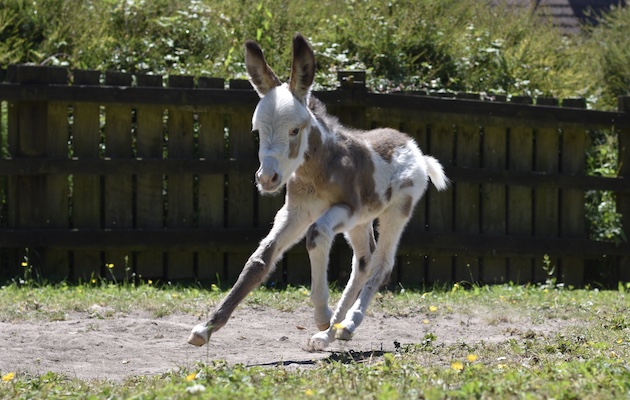 A foal born to a rescued donkey is settling in well to his life at a welfare charity.

Fudge was rescued from Yorkshire in September 2017 along with two other donkeys, Bert and Fidget.

Concerned members of the public called the RSPCA after they saw the donkeys straying on to a road.

The police and nearby vets were also contacted to try and find the owner. But after a 14-day notice period, the trio were signed over to the care of the Donkey Sanctuary.

“We had been monitoring Fudge regularly, but because she arrived pregnant, we didn’t have any clear indication of when she would foal,” said Donkey Sanctuary vet Abigail Sefton.

“The farm staff at Paccombe Farm were instrumental in keeping a close eye on her while we waited.

“Fudge started foaling during the middle of the day, which is quite unusual, and a nice opportunity for the farm staff to see the birthing process.”

Watch a video of the adorable foal, who has a lot to say for himself!

“It is a rags to riches donkey story, especially for the two abandoned boys”

The jenny needed help as the foal, Coby, was stuck in a difficult position. But with the help of staff, she safely delivered the skewbald colt last month.

“He’s a big, strong boy, and Fudge is quite a small, young donkey, so it was a very tight fit,” added Ms Sefton.

“I have to admit that I thought she would foal several months ago, so we’ve been anticipating this baby for quite a while.

“Even though Fudge is a young inexperienced mother, she bonded with her baby straight away and has been very loving and protective. It’s been wonderful seeing them together.”

The charity has released videos of the colt racing around his paddock.

All three donkeys, plus the new foal, have settled into their new lives well and have been provided with a permanent home for the rest of their lives.

In this week’s Horse & Hound magazine, out on Thursday 12 July 2018, don’t miss our ‘Rider fitness’ special including what top riders eat, fitness for across the disciplines and more.

Plus, read our interview with Royal Ascot-winning trainer Eve Johnson Houghton and in this week’s ‘Vet clinic’ we take a look at bacterial meningitis in horses. We also have reports from eventing action at Barbury, racing from Sandown Park and much more.