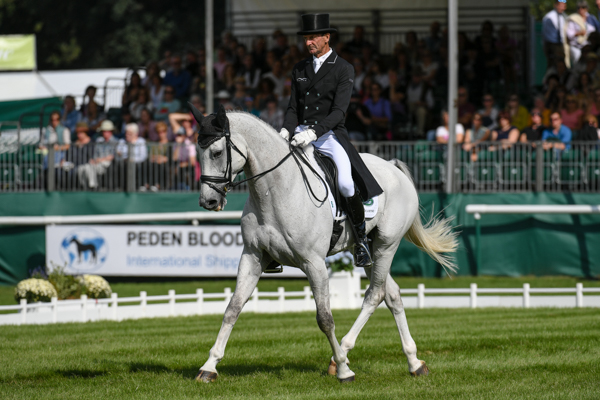 The top of the leaderboard has been reshuffled at the end of day two of dressage at the Land Rover Burghley Horse Trials (29 August-2 September).

Five-time Burghley winner Mark Todd sits in top spot on a score of 26.4 on the big-moving grey, Kiltubrid Rhapsody (pictured below).

“I’m so pleased with him — he’s getting better and better,” Mark said of the 11-year-old who was sixth at Badminton this spring. “He’s got a wonderful temperament and although he became a little nervous in the warm-up, he was better when we went into the arena. We had a little skip in the extended trot, which he never normally does, but for where he is in his training at the moment, he couldn’t have performed much better.”

Fellow Kiwi, Tim Price is in second with Ringwood Sky Boy, who was fifth and fourth at Burghley in 2017 and 2016 respectively. They are just half a penalty behind Mark.

“I’ve had high hopes for him here and he was very good,” said Tim. “He’s maybe maturing and we know how to best prepare him now. The highlights of his test were that he stood still in all three of his halts! He’s gone sideways in them before, including at the Rio Olympics — I think repetition in his training has helped, but we still can’t always be sure that he’ll go in there and do it.”

Oliver Townend is third on the first of his three rides, MHS King Joules. The pair held onto the lead for the majority of the two days of dressage on a score of 27.2.

Oliver said yesterday that he “had no complaints at all” and “if I stay on that mark throughout the competition, I will be happy.”

Britain’s Sarah Bullimore is now in fourth on Reve Du Rouet with a score of 27.3 and Oliver is just .6 of a penalty behind her in fifth on last year’s winner, Ballaghmor Class.

“The test didn’t quite come off as I had hoped for,” explained Oliver. “A few mistakes crept in, but I was thrilled with his performance. He’s been in a few big atmospheres in quick succession recently so it’s testament to the horse’s attitude that he can go in there and perform the way he did.”

Germany’s sole representative at this year’s Burghley is Andreas Dibowski in sixth with FRH Butts Avedon and Oliver is in seventh with the last of his three rides, Cooley SRS.

Just 7.5 penalties separate the top 30, so the cross-country tomorrow, which kicks off at 11am, could prove highly influential.