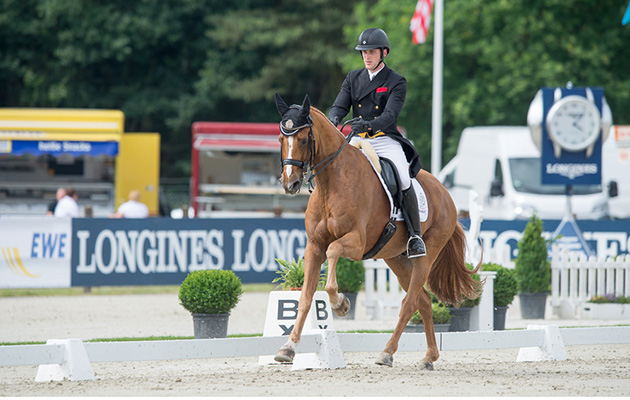 Belgian rider Julien Despontin leads the dressage after Thursday’s action in the DHL CCI4* at Luhmühlen, creating a feeling of déjà vu as he was on top after the first phase here last year.

“He was better than last year in the trot and walk, but he was a bit tense in the canter, so I couldn’t push him forward for the last part,” said Julien. “It’s another year, another set of judges and every time is a bit different, but he did a really good job.”

Julien warned that as last year he expects to incur time-faults across country over Mark Phillips’ “tough” course. Last year he added 22.4 to his score in this phase, finishing 20th.

“He is still a cold blood among quicker horses,” he said. “But I have had better preparation than last time so I hope not to lose so much time.”

The Australians, who are using this event as a final trial for the Rio Olympics, hold second and third. Emma Dougall sits second on a score of 40.6 on Belcam Bear, owned by herself, her partner Kevin McNab and her mother Julia.

“I was really happy with how he settled in there, but he wasn’t as flamboyant as he can be and we had a couple of little mistakes,” she said.

“The changes from left to right were not great and in the walk — which is normally really good — he had half a step where he nearly broke. Apart from that I’m really happy, especially as it’s his first four-star.”

Belcam Bear missed much of last season with injuries, so he needs to secure his individual qualification for Rio this weekend as well as impressing the selectors.

“For him now that’s a bad day — which is good in that we know it didn’t go as well as it can, but it’s still ok,” said Bill.

“There were no major mistakes, but he just showed a bit of tension in the atmosphere. I couldn’t ask for more on the medium and extended trots or he’d have come above the bit and broken.”

Lydia Hannon, 27, is the best of the Brits in sixth with Carol and Christopher Harris’ My Royal Touch. They scored 50.6.

“It’s my first time abroad and my first four-star,” she said. “I was hoping for a clear round and we missed one change, but I’m chuffed. I can’t thank Andrew Fletcher enough for all his help. He’s changed the way I work and train the horses and without him I wouldn’t be here.”

Lydia Hannon and My Royal Touch at Luhmühlen 2016. Picture by Jon Stroud Media

Lydia rode the 12-year-old mare by Touchdown in a double bridle.

“She can be strong through the contact so this helps as I can be lighter and softer, although I think perhaps I should have taken it off for the test — it’s a case of fine tuning now,” she said.

Andrew Hoy — another Australian — leads the CIC3* Meßmer Trophy with a score of 35.3 on Cheeky Calimbo.

Full report of Luhmühlen in H&H next week, out 23 June.