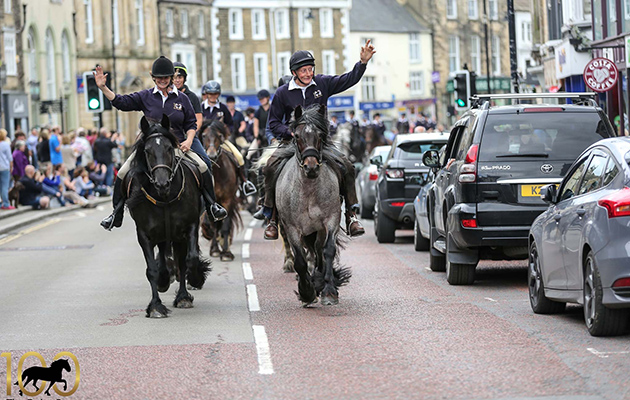 More than 60 Dales ponies were ridden through the streets of Barnard Castle in County Durham on Saturday (30 July) on a historic day for the rare breed.

The President’s Ride was the start of this week’s centenary celebrations of the Dales Pony Society.

“It was an incredibly special day,” said Anna Pennell, who organised the ride together with Anne Alderson and Freda Longstaff.

The 15-mile ride started at 10am from Hill Gill farm in Baldersdale.

Riders were led by route master Charlie Parker and Jo Ashby, the society’s secretary, across the moors of south Durham. The pair were followed by Meg Robbins, who had come from the US to take part in the ride.

Together they gathered just outside the town at the River Tees, before riding over Castle Bridge up to the main street through Barnard Castle.

The roads, which were lined by huge crowds, were closed for the ride.

“Everyone had tears in their eyes coming up to town. The ponies all trotted out well, it was a truly memorable and historic day,” said Mrs Ashby, who has been the breed society’s secretary for 27 years.

“The whole country has been taking part in area rides throughout the summer. The event is designed to involve as many members as possible,” said Mrs Ashby.

Members in France and the US also organised their own rides.

Mrs Ashby’s pony’s breastplate was mounted with President Ride plaques brought back by area members from around the country.

This year there are dressage and working hunter classes for the first time alongside the normal ridden and in-hand sections.

The society will also hold its Horse of the Year Show qualifier.

During the centenary week there are stud visits, a chance to see ponies working in panniers at the Killhope Lead Mining Museum, and a country and western evening at Streatlam showground (3 August).