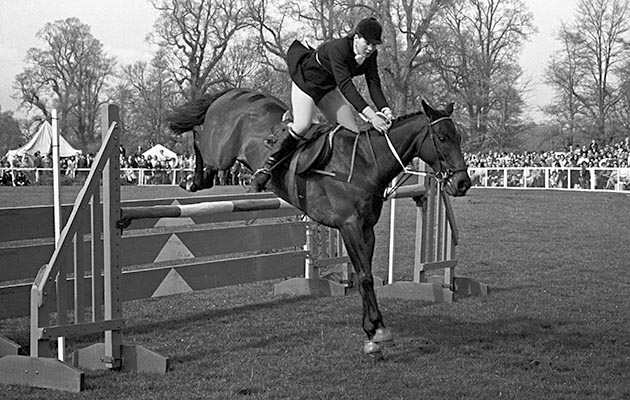 Things were a little different at Badminton in 1968: spectators were smartly dressed in ties, riders went cross-country in low key-looking sweaters and Prince Philip watched on from the bonnet of his car

This was the 19th running of Badminton Horse Trials —  having first been run in 1949, when the 10th Duke of Beaufort had the idea of using his Gloucestershire home to host an event so that British riders could train for future international events.

Amongst the smartly-clad spectators in 1968 was The Queen, with her husband Prince Philip watching on from the bonnet of a Land Rover — seemingly sans security.

This was a time before frangible pins or even body protectors, as the brave horses and riders took on the challenging course.

And the winning combination in 1968 was a little unexpected: the pint sized Our Nobby, who stood at just 14.3 ½hh, with his 20-year-old rider Jane Bullen (Holderness-Roddam).

“Nearing the finish of the rugged trials one name was emerging ahead and clear of the rest: it was Jane Bullen on Our Nobby. The 20-year-old part-time rider and student nurse had upset the form book and won the event,” said the commentator. “The gallant Our Nobby was the smallest horse in the contest. The crowd has seen a great victory by a new Olympic hope.”

Indeed, Jane went on to help the British team to a gold medal at the Mexico Olympics that year — becoming the first British woman to win a medal in the sport.

The story is all the more remarkable when you consider that Jane’s mother had bought the pony for £120 with the hope that they could sell him on quite easily, but instead he developed a napping habit and so never left.