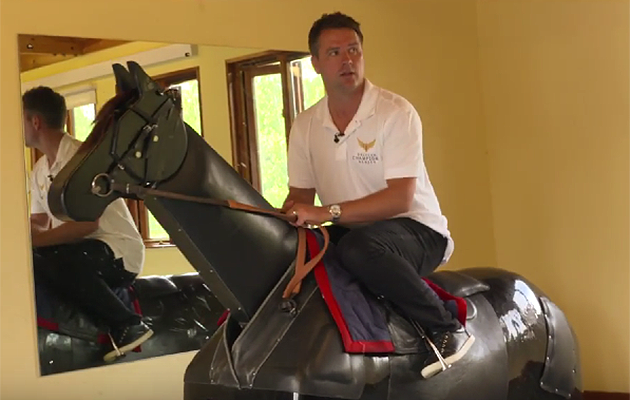 Most famous for his skills on the football pitch, Michael Owen faced a new challenge when top Flat jockey Ryan Moore put him through his paces aboard a racehorse simulator, during his first ‘riding lesson’.

The former England international footballer has always had a passion for racing and owns numerous racehorses. He bred and owned the former Tom Dascombe-trained stable star Brown Panther, who won the 2015 Dubai Gold Cup. He also owns the impressive training establishment, Manor House Stables, in Cheshire.

During the session held at the British Racing School in Newmarket, Michael rode the equivalent of the QIPCO British Champions Sprint Stakes — a six-furlong race held on Champions Day at Ascot (15 October) — on a fast-moving mechanical horse.

Even for a former top sportsperson, like Michael, it appeared to be a tough workout and the 36-year-old was evidently surprised at how much hard work it was.

“Ryan Moore is one of the best jockeys in the world so who better to give me my first riding lesson? As a lifelong racing fan, I knew that the job of a jockey wasn’t easy, but as a former professional sportsman I was surprised by just how tough it was,” said Michael.

“Even though it was only for a few minutes it left my legs feeling like jelly. Having someone like Ryan next to me making it look like a walk in the park really shows the level of strength and fitness these guys have.”

Luckily, three-time champion Flat jockey Ryan was on hand to give some much-needed advice.

“Teaching an ex-international footballer how to ride was a first. As Michael said, when you are a professional, it’s hard to get into the mind frame of a complete beginner, but we got there with the basics,” he added.

Will a charity race be next on Michael Owen’s bucket list? Watch this space…