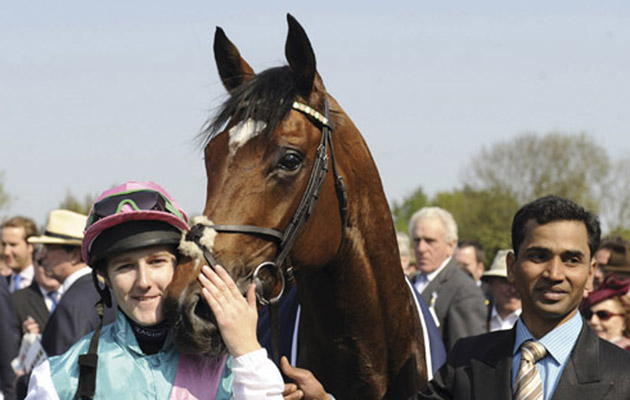 He was a superstar on the racecourse and Frankel is now proving a success in the sales ring, as his progeny have taken centre stage during the Tattersalls October Yearling sale (3-14 October 2017) with one of his fillies selling for 2.5m guineas

He was a superstar on the racecourse and Frankel is now proving a success in the sales ring as his progeny have taken centre stage during the Tattersalls October Yearling sale (3-14 October 2017).

One of the highlights for the stallion’s fans was the remarkable sale of a Frankel filly for 2.5m guineas to new Japanese racing club DMM.com — who would not be outdone the following day with the purchase of another daughter of Frankel, forking out a further 1.4m guineas.

Frankel retired in 2012 unbeaten in 14 races, propelling Sir Henry back into the spotlight and boosting his career after some low years. The trainer died in June 2013 of cancer, and Lady Cecil took over the trainer’s licence. Frankel now stands at Banstead Manor Stud in Newmarket.

To celebrate the late Sir Henry Cecil-trained wonder horse, we take a look back down memory lane — from his success on the track (video) to what Sir Henry’s widow Lady Cecil revealed about about her late husband and his extraordinary  horse:

Can you tell us more about Frankel’s character and personality?

“Frankel is an intelligent and exuberant horse,” says Lady Cecil. “He has a magnificent action, with that extraordinary stride that made him stand out. Henry worked with him, along with his work-rider, Shane Fetherstonhaugh, to channel that enthusiasm in the best possible way. He learned to settle beautifully in his races. He was definitely a dominant male and, along with his three-parts brother Bullet Train, enjoyed leading the string out onto the heath every morning. It was fabulous for all of us to have such a charismatic and talented horse in the stable.”

Sir Henry had an intrinsic and unique connection with Frankel. Can you tell us a little more about it?

“Henry had a very strong connection with Frankel. The experience gained from working with racehorses all his life meant he just knew which way to go with Frankel at every turn. Indeed, in Henry’s mind’s eye, he understood how the horse would develop and at what pace. This allowed him to plan the horse’s campaign, in terms of what races he would take in, when to step up him in trip.”

Together Sir Henry and Frankel had an incredible journey. Can you share with us one of your fondest memories of the pair?

“It is hard to know where to begin because there were so many special days — the 2000 Guineas, the first Sussex Stakes and, of course, his final race at Ascot. But I think the most exhilarating experience came at York when he won the Juddmonte International Stakes. Henry had undergone a lot of treatment in the build-up to the race and wasn’t feeling great, but he was absolutely determined to saddle the horse and be there for him. It was the first time Frankel had been asked to go a mile and a quarter, plus it was a race sponsored by the Prince. I recall there being a massive crowd and an incredible atmosphere at York that day and, of course, Frankel rose to the occasion. The effortless way he came past his rivals to lead and then go on was just amazing. And the reaction from the race-goers was magical. Henry seemed to get a major boost from watching Frankel win that day. I will never forget it.”