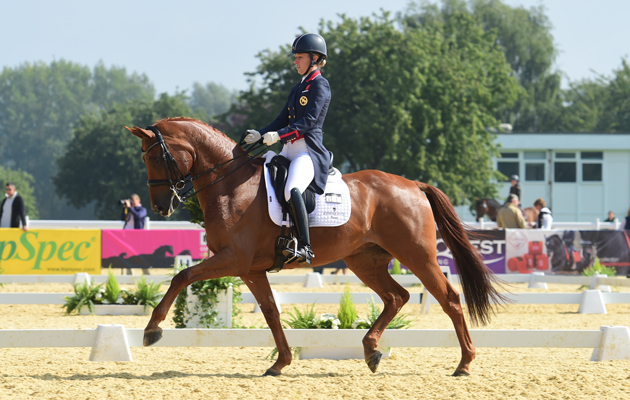 It was Charlotte Dujardin’s day at the LeMieux National Dressage Championships, as she landed both the Lemieux grand prix and TopSpec medium open titles.

She added her first national grand prix title to Olympic, world and European golds, piloting Carl Hester and Ann Cohn’s nine-year-old Breitling W gelding Barolo to a 72.9% victory in only the horse’s third grand prix. The youngest horse in the class, Barolo finished ahead of Spencer Wilton and Numberto in second and Hayley Watson-Greaves in third with WG Rubins Nite.

“He’s still very green and the atmosphere here is a lot for a youngster. Last year he had a complete meltdown here in the prix st georges (PSG) when he saw the flags, but every time he’s been out this year he has got better and better.”

The Saracen Horse Feeds inter I freestyle went right to the wire, with Becky Moody and Carinsio’s powerful, correct test earning them a stunning 80.5%. Becky showed off her difficult and imaginative floorplan to great effect with the eight-year-old Painted Black gelding. But it was Michael Eilberg and Woodlander Farouche (Fuerst Heinrich x Dimaggio) who were named overall inter I champions, their second-place 78.62% freestyle score plus yesterday’s 74.11% clinching the title by 0.69%.

“I was really pleased with her today,” said Michael. “Those little mistakes still held us back a bit but she was better today and a lot of the stuff felt where it needs to be.

Becky was brimming with pride for the hot and tricky Carinsio. “80% has been my target all year – I’ve been close to it a couple of times so to get it here at the nationals was just brilliant,” she said. “He’s such a talented horse but he’s been quirky along the way. Today he definitely felt the most settled since he’s been here.”

“She was hot as hell yesterday as it’s quite buzzy here,” said Charlotte. “But today she was on great form. She’s a very honest mare and really tries. She’s goes in the arena and is no different in the arena to how she is outside.”

Charlotte also had plenty to be pleased about in the pre-judging of the four and five-year-olds for the Shearwater Potential International Dressage Horse championship. She will go forward to tomorrow’s final with four-year-old MSJ Top Secret and five-year-old Florentina.