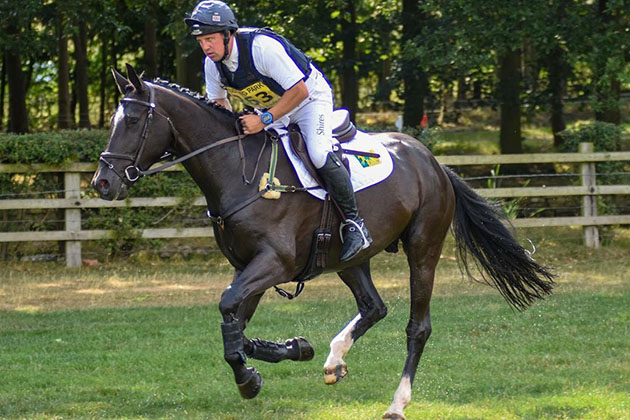 It’s been a busy couple of weeks for us at the yard and it’s certainly been a controversial week with the WEG (World Equestrian Games) eventing team selection being announced. I think at the end of the day, everybody who made that short list deserved to be there and should be proud of the achievements they’d had that put them on it. With only five places in total though, there was always going to be heartache for those not selected. The selectors know the horse and rider combinations a lot more than we do, so we should support the decisions made and cheer Team GB on as best we can.

We had 12 horses competing in total last week, some at Aston-le-Walls and some at Bold Heath. All of them did me proud. Charlotte Cole’s Dakotah VII (Daks) had his first comeback run since Houghton and finished second in the open novice, while Amanda and Craig Morris’ Roko Rock (Boots) stepped up to his first novice and finished in 10th place. The Corn Crake (Herbie, see video top) was again exceptional in the open intermediate finishing sixth, as was DHI Paparazzi (Pom) — both just need to polish up on their dressage tests now. And to top it all off the BE100 horses put in pretty grown up double clears. In total all 12 horses had clear cross-country rounds and felt in fantastic form, seven of which were double clear. The other five were also in good form, but had poles down in the showjumping due to jockey error, so we’ll take it as a learning curve and move on.

I sat down with a drink on the Saturday evening, after the final day, feeling completely exhausted. I’d decided though that this was an acceptable type of exhaustion because of the positive results that I’d had. I usually go into one of three phases when travelling back from a competition:

1. I’m so happy with how all the horses have gone, it’s completely worth getting up in the middle of the night and travelling miles to an event for. Cue billy big bollocks feeling. Let’s plan where we can take them all next, we’ve high hopes for them. Let’s post some fab pictures of the magical unicorns on social media!

2. The horses get rubbish dressage marks or something goes wrong, followed by poles rolling due to me making the wrong judgment call and moments of stupidity in the showjumping. Cue the long sit in the lorry. “I’m not sure I should even be going cross-country!” Doubting moments follow. “We may as well just go home now.” “I’m not what I used to be. I’m old and past it.” (Did you not know 35 is the new 70?!). Then cue cross-country start box adrenaline rush… and we’re away and have a storming round. We then leave in the lorry still looking for positives and if we can just get the other phases better, it’ll all be grand.

3. When the event does NOT, and I repeat NOT, go well or to plan. Cue the drive of doom. I want to pack the stuff back in the lorry as quickly as possible and remove myself from the situation literally seething. “I’m useless, I’m not as good as I used to be. I’m past it. I may as well just give up.” But usually far worse than phase two comments on the way home, while thinking of all the other things I could do that are non-horse related or what country I could possibly emigrate to. I then sit sulkily all evening, answering only with a grunt and don’t usually want to look at a horse for the next day, week or maybe even a year. I do this while trawling through everyone else’s social media at the same time thinking the grass is so much greener on the other side.

The hardest part after reaching phase three is dealing with your mindset in general. When competing again when I was in a low place, I at times used to dread riding in front of other people, however big or small the crowd. I used to think most people spectating were totally scrutinising and pulling every aspect of me apart, riding wise and personally.

I’m a bit like Marmite anyway, people either love me or hate. So my way of dealing with it used to be to try and live my life like a wannabe Jordan Belfort, the ‘Wolf’ of the eventing world. It contained however absolutely no helicopters, nothing luxurious and certainly more penny stocks than blue chips. But I hung on to the fact I had the sell, sell, sell, win, win, win mentality, and because I was cocky and determined to be competitive I would be ok. But I don’t think a large ego actually gives you any kind of competitive edge, maybe only temporarily. I have come to learn it’s just a mask for huge amounts of insecurity, especially speaking from experience with myself and having gone through therapy. Until you can accept and deal with your own insecurities and be happy with the way ‘it just is’, it’s difficult to find stability physically and mentally.

The strongest way to be is to know your strengths, your weaknesses and be happy enough to accept and work on them and not be judged by what people think. Some will like you and others won’t — you’re never going to be everyone’s cup of tea. But as long as your performance is better than your last one, you should be satisfied with that.

I have learnt a lot recently from my daughter, Niamh. For a few months we had to go to a number of hospital appointments with her for scans, X-rays and consultations to get to the bottom of her inability to walk. This was a worrying time as a parent. Following a diagnosis she has now been fitted with a splint that inserts into her shoe and eventually has enabled her to walk. She laughs and is incredibly happy and proud of herself at what she can achieve since she’s been wearing it. She has absolutely no idea yet at two-years-old about insecurities, nor is she conscious of people looking at her wearing it. She sets herself goals, first was to walk a few feet from the chair to the coffee table. Then halfway across the kitchen. Then across the full length of the kitchen. She now walks everywhere, even when it was painful, she didn’t give up. That is the determination that as a competitor we need — to set goals to achieve more than we did yesterday and to never give up. I am immensely proud of her and she is a huge inspiration of mine! I know she’s inspired her brother and sister too.

Matt talks about some recent good competition form, fitness and a new sponsor...

The next stop was Somerford Park with five horses in the intermediate sections. This proved to be well worth the 3.30am alarm clock as the venue was lovely and the going perfect. The sections were competitive and full of top horses, so I was delighted when Pom held his own against some great campaigners. He put in a 23 dressage and double clear to finish in second place, just one point behind the leader. The others were all good too, some steady away and Herbie again holding his own for seventh in another strong section.

With Blenheim next on the agenda, I was a tad emotional entering as the last time I went was with my old coloured horse Zippy (Park Pilot) at the Europeans in 2005. I’m hoping I have as much luck there as I did the last time, but what will be will be. I’m just delighted to be going back!