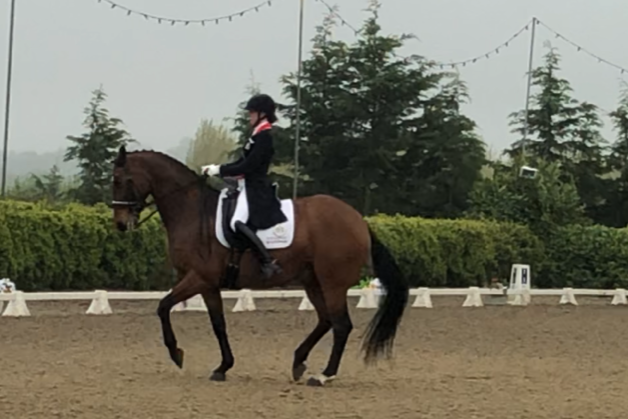 Now, back to business. Apollo and I had two fantastic lessons with Carl Hester (see video top) for a pre-season shape up. Apollo was just amazing, he was firing on all cylinders and banging out the grand prix moves. Carl complimented that he was looking great and I now have the Carl seal of approval to just go out and try some grands prix. So hold onto your hats as that debut will be coming up in the next few months.

One of my puppies tucking into a carrot

It’s so inspirational being at Carl’s. As I’m riding, Valegro mooches past on his way to the paddocks and I’m like ‘come on Apollo, go like he does!’ Zazu and my sister Samantha also came along for lessons and he is looking amazing. He’s like a jumbo jet — one that hasn’t quite learnt where all his own gears and levers are though. When he has learnt to control his raw power, he is going to be just WOW.

After Carl’s, it was time to prep for our first premier league of the season at Keysoe. With an early Sunday time in the Inter II, I was up to feed Apollo at 5am and on the road by six, ready to be on at 9am.

He warmed up really nicely, if a little on the underpowered side but I just wanted to get through it and see how it went before I turn the turbo up. Being a little ring rusty I didn’t nail the centre line like I normally do, but all the trot work, including piaffe and passage, went smoothly. In the canter we had a large pirouette and once again, fluffed the one time tempi-changes. But as my dad put it ; it would be boring if I just did it all right first time! So considering the lack of full power and mistakes, I was over the moon to score 68.55% – with one judge having us on 70%. This was enough to land us in second place, which at Inter II level means a direct qualification to the national championships.

Apollo in the Inter II at Keysoe

The following weekend, it was another first for me — my first trip to Badminton. I was helping man the Sue Carson Saddles stand, which was really good fun. I loved all of it and had a lot of fun testing out all the gins in the food tent! I’ll admit though that I got totally lost going around the shops. While I didn’t walk the course, (as I spent too much time lost…) I saw one fence and couldn’t believe the sheer size of it. As someone who likes to congratulate myself whenever I pop a fallen tree in the woods and get sheepish doing trot poles, I’ve got no idea how the eventers do it. All I can say is that don’t ever expect a career change from me…!

On the Sue Carson stand at Badminton

Back home, the renovations to our yard are nearly complete, thanks to my uncle Dan the handy man, Mike the builder and my dad. We’ve had stables re-strengthened and stables turned into livery barns, hay storages and a new tack room. It’s been tricky working around everything for months, but it’s all going to be worth it and when everything is finalised I will be sharing photos with you all.

That’s it from me for now, but keep your eyes peeled for more updates, including my first ever grand prix…!