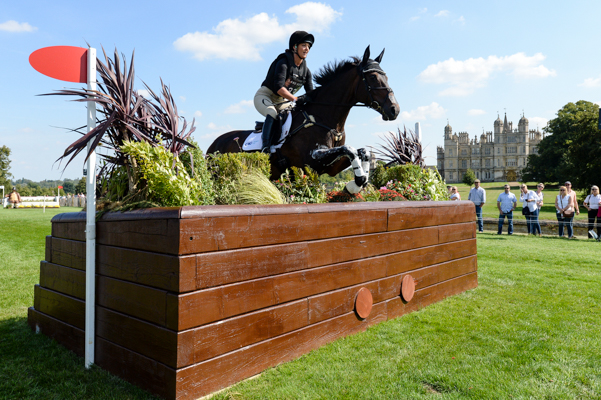 We did it! It’s not as pretty as I would have liked, but we got a clear round in our first ever four-star cross-country at the Land Rover Burghley Horse Trials. Clover lost a shoe quite early on and I was very conscious of the fact she was slipping on the turns into the fences. It’s worth mentioning that with the crowds on either side of the string, the gap seems smaller and where you normally see your line — all the bodies mean you have to slow up more than usual. I backed off more than I would normally, which I feel bad about. I turned into a couple of fences and her front left fore just went from under us, so I over-checked, burying her into the fences as I wasn’t brave enough to keep galloping at them without a shoe or studs, but we got through the flags.

We were great through the Leaf Pit, which I had already decided to go the alternative route as it wasn’t that much longer, and the ground was hard on the landing off the drop, so I thought I would save her legs and sacrifice a few seconds by going long. Discovery Valley and the Trout Hatchery went well, as did the Joules corners, all of which we took a direct line to. We came to the Rolex combination, I had already planned on going long here, it wasn’t worth risking 20 penalties at this acute ditch/rail when the longer route wasn’t going to add much more time and with only one more jumping effort. She jumped the oxer well however totally misread the ditch and didn’t pick up, despite me seeing a lovely stride she just cantered into the ditch and tripped, making the bounce to the upright hard work for us both, but bless her soul, she picked up and carried on to do the corner five strides later clear.

SHE IS AMAZING — a lot of horses wouldn’t have dug that deep and kept going forwards, but she did. I was aware that at the next few fences she was a bit winded and not her usual self and then we had the huge pull up Winners’ Avenue… she was a bit wobbly and not her obvious self (pulling me in) which is quite scary when the next fence is the Cottesmore Leap… I had to (for the first time ever) kick and get after my pony. It worked well and she felt like she had wings over that huge ditch — so proud!

Walking the course with mum, who has a broken leg

It’s cross-country day at Burghley for Hazel and Clover

We were on the home straight and although we slightly climbed over a couple of the single fences, we made it home in one piece back down the hill. I couldn’t be prouder with how we did — it wasn’t pretty, and despite being gutted with having to get after her when I finished, having watched lots of the other rounds, I realise that’s four-star — it’s not as easy as three-star and although I planned a smooth round it, didn’t happen, but I rode to plan a and she and I achieved a clear round, despite only having three wheels for 75% of the course.. what can I say? Bring on Sunday.

Full report from Burghley, including exclusive expert comment and full analysis of every phase, in this week’s Horse & Hound magazine, out Thursday, 6 September.