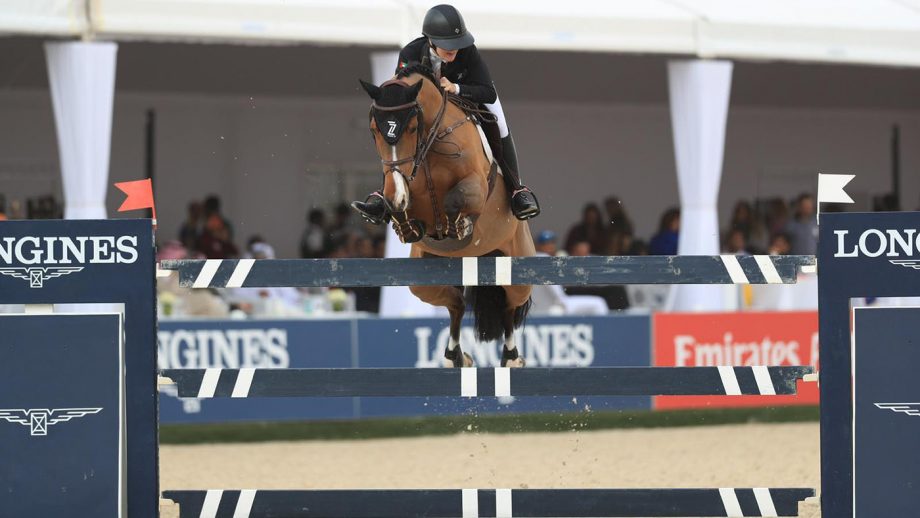 It feels like we’re back where it all began. It my very first vlog for H&H I talked to you about my amazing experience out in Dubai with the Breen Team riding for Team Z7. Throw it forward a year and I am happy to say we are back in sunny Dubai!

A lot has happened in January so far. The horses left England just before the New Year, and spent a few days in quarantine before travelling to the fabulous Z7 stables in Zabeel in Dubai. I flew out with super grooms Leo and Ludo (who makes a cameo in the video — blink and you might miss it), to meet the horses the other end, where we were joined by DLS Showjumping’s David Simpson, Breen Sport Horses’ Trevor Breen, and of course Shane.

We were straight into the competing mix with the Abu Dhabi CSI4*-W, a World Cup show, on the outskirts of Abu Dhabi. We are so lucky that all the shows on the UAE tour are within two hours of the Z7 stables, so once the horses arrive in Dubai they spend very little time travelling.

On the first day, Z7 Caretina jumped the 1.40m for just four faults and Z7 Cordanos V jumped the 1.45m. Z7 Caretina is only eight and is just stepping up from young horse classes, so it was great to ride her in her first 1.45m Longines ranking class, where we finished fifth on day two. On the final day, Z7 Cordanos V jumped a fantastic round in the World Cup for just four faults and Carentina jumped double clear in the ranking class to finish fourth.

The second show was the CSI4* Al Shira’aa show, also right next to Abu Dhabi, but at a different showground. Cordanos jumped the ranking class as his first class, which was a big ask and he made a couple of mistakes, but I was still really proud of him. Cash-Up then jumped clear with one time fault in the 1.40m and Z7 Canya Dance jumped in the 1.30m.

On the second day both Cordanos and Cash-Up jumped the 1.50m and Canya Dance was sixth in the 1.30m.

Saturday was a very exciting day as Abu Dhabi hosted its first ever Derby. Edward Bunn came from Hickstead to advise on building the course, which was very impressive and full of derby fences — ditches, water, rustic rails and, of course, the Hickstead planks — it felt just like home! The competition was very fast and furious and was great to have such an excited crowd getting behind us all as we jumped round.

Georgia gives us a look behind the scenes at a particularly busy show, where she rode several horses

Next up was the five-star World Cup show in Dubai. The ring here was big and beautiful which always makes jumping very enjoyable. The horses jumped great throughout the week but it was Saturday that turned into the day I have dreamt about: the amazing Z7 Caretina won the 1.45m accumulator. This marked the biggest win of my career so far and just further cements in me how lucky I am to have the opportunities and such wonderful horses, all under such amazing tutelage — sometimes I have to pinch myself!

There’s still a lot more shows to ride at before we head back to England — let’s hope we can carry on as we have started!