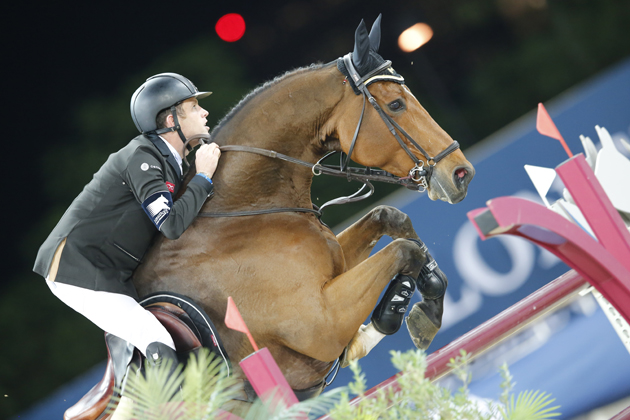 As first rider in for the second round, Scott knew he had to be fast to have a chance of a good placing and gaining points to help him win overall. And while they did indeed put in a speedy time, Scott and Lord and Lady Harris and Lady Kirkham’s Hello Sanctos rolled a pole off the upright at fence 11. They finished eighth in the grand prix.

“I’m happy but disappointed too,” said Scott after his overall second place was confirmed. “I had a silly fence in the first round and in the second round I felt I had to beat the other four-faulters to have a chance of getting points — that’s why I had the fence down.”

Four riders remained fault free after the second round and went through to a jump-off, including Luciana and Sweden’s Rolf-Göran Bengtsson, who was also in the running for the overall title.

Qatar’s Sheikh Ali Bin Khalid Al Thani led off the jump-off on First Devision but ran into trouble with the first fence down and another further round.

Germany’s Meredith Michaels-Beerbaum, the second rider in, laid down a fast time with the grey Fibonacci 17 and Rolf-Göran could not better her target with the great veteran Casall ASK.

But Luciana shot round the course on the little chestnut Fit For Fun, scooting ahead by 0.45 of a second.

“I have no words – I’m just so happy,” said Luciana. “I never expected to even win the class and I’ve won the class and the series. Our win is down to teamwork and I’m so grateful to everyone – my horse and all my friends.”

Full report from Doha in H&H magazine this week, out Thursday, 19 November.