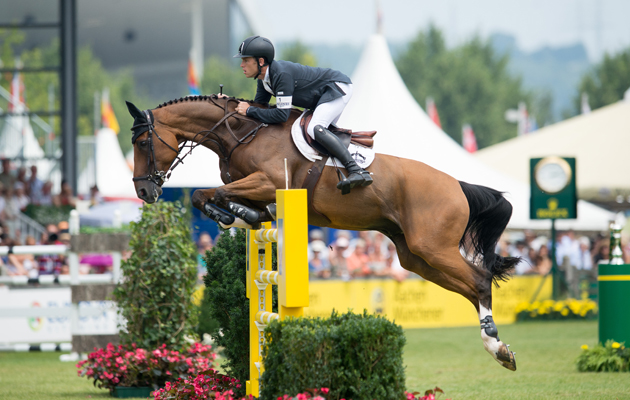 World number one Scott Brash went to Spruce Meadows in Canada with one goal in mind, to make showjumping history by becoming the first person to win the Rolex Grand Slam today (Sunday, 13 September). The packed grandstands watched with euphoria as he did exactly that.

Riding the popular Hello Sanctos, the ultra cool-headed Scottish rider produced a flawless performance in the the CP International grand prix, the third and final leg of the grand slam, to collect the whooping €1.3million (£950,000) total prize fund – which included the €1million grand slam bonus. Following his wins in Geneva and Aachen, Scott just needed to take part today in order to collect €500,000 (£370,000).

Scott rode the solo clear in the final round to take the honours, fending off Belgium’s Pieter Devos and Dylano who came agonisingly close and picked up just one time fault to leave him in runner-up spot. Brazil’s Pedro Veniss continued what has been a successful show for his home country, after yesterday’s Nations Cup triumph, by occupying the third podium position.

“When you target something for so long and then come here and achieve that dream, it’s incredible,” said Scott. “It hasn’t sunk in yet. I’ve had more media attention than ever before.

“Words cannot describe this feeling, I’m so lucky to be working with a horse like Sanctos, he felt like he could do another round today. To win at Geneva, Aachen and then here on three different horses would be an achievement but to do it on the same horse is incredible,” he added of the 13-year-old son of Quasimodo who is owned by Lord and Lady Harris and Lady Kirkham.

Course-designer Venezuelan Leopoldo Palacios presented the riders with two tough but well-built tracks. The first round included a rarely seen treble of uprights following the water jump which saw 24 combinations fault in total, including both Michael Whitaker (Cassionato) and nephew William (Fandango).

The top 12, which included 10 clear rounds and two one-time faulters, went into the second round. Scott produced the fastest first-round clear which meant he was last to go in the final round. His solo clear resulted in no jump-off.