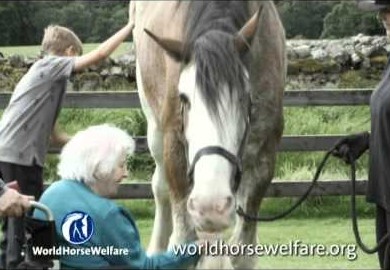 A 19hh rescue horse has taken a starring role in a new campaign for an equine welfare charity.

The short Adopt-A-Horse campaign film launched on 17 November and will run online and on television until after Christmas.

“When we were thinking about the perfect horse to front our new TV advert we knew that Digger had to be the first choice,” said Emma Williams from the charity.

“He’s already developed a somewhat celebrity status through his incredible size and wonderful nature so turning his (massive) hooves to television advertising seemed like the next natural step in his career.”

In the advert, the viewer is introduced to Star, who was neglected and left in a headcollar that was so small it cut deep into his nose and head.

Ariel and Cleo, who were shut away for months in a dark container, also feature.

Digger arrived at World Horse Welfare’s Belwade Farm base in Aberdeenshire as a four-year-old in 2007.

His owner contacted the charity to ask it for help as they were struggling to cope with him due to their own poor health and his rapidly increasing size.

Due to his fast growth, problems developed in his hind limbs and he needed extensive rehabilitation.

Digger was accepted onto a two-year training programme with The Household Cavalry to become a drum horse.

He took part in preparations for the Royal Wedding and Major General parades, but the life did not suit him and he returned to Belwade Farm in 2012.

Supporters will be able to visit their chosen horse at World Horse Welfare’s centres, where the equines will continue to live.

Ms Williams added that the charity is seeing increased demand for its adoption scheme and are looking to develop it further.

A new website with updates for the adopters is also set to be launched.