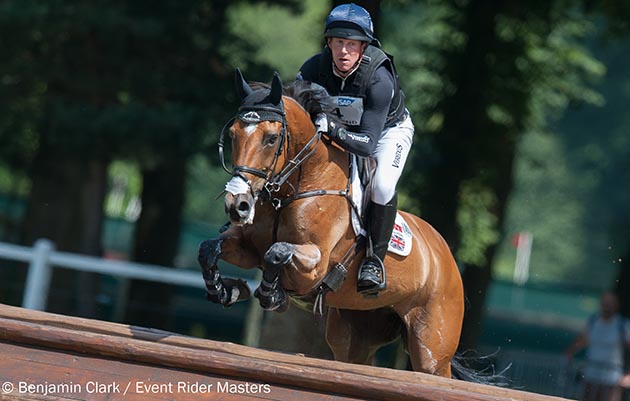 The pair moved up from 10th after dressage with a rare clear showjumping in the time this morning and also stayed fault free this afternoon on the cross-country.

“He’s exceeded expectations all this weekend — we knew he’d be ring rusty as he’s come here with little preparation and it’s his first cross-country in four months, but he was very good,” said Oliver.

Oliver said the ERM series is “the biggest step forward in eventing ever”, adding that it changed his life for the better winning the series last year.

The class winner was Germany’s double Olympic champion Michael Jung, riding the relatively inexperienced nine-year-old Star Connection. After fifth place in the dressage and a showjumping clear, he could afford his seven seconds over the cross-country optimum.

“Sometimes he needed help and I changed my plan in a few places, but he answered every question,” said Michael.

The home side’s Karim Florent Laghouag took second on the stallion Entebbe De Hus, who had one down this morning but was clear in the time across country.

By contrast, the time was an extremely influential factor in the morning’s showjumping session and only three riders managed clears inside the optimum — France’s Donatien Schauly (Pivoine Des Touches, seventh), Oliver and Michael. Three other competitors from the 39 starters came home inside the 68-second target, but these all had at least one pole down.

Dressage leader Bettina Hoy had five time-faults with Seigneur Medicott and took the front rail off the oxer over the water tray at fence 10, dropping to seventh before cross-country. She pulled back up to fifth with 0.8 of a cross-country time-fault.

Andrew Hoy, second overnight, incurred five faults for knocking the first part of the treble at fence six and a single second over the time, which resulted in him slipping to sixth. He and Cheeky Calimbo then had a run-out at the final combination across-country, a double of angled brushes on two strides, after three strides downhill from a spread fence.

For Britain, Sarah Cohen (Treason) and Gemma Tattersall (Chico Bella P) both had two time-faults showjumping, but jumped clear — Gemma rose from sixth to third and Sarah from 16th to 11th in this phase. Sarah finished ninth, adding useful points on the ERM series leaderboard after her win at Wiesbaden.

Will Furlong lost his top-10 place at this stage with Livingstone as they faulted at the planks at fence five and the spread at fence 10, as well as incurring two time-penalties. Will jumped clear across country, with 17.2 time-faults.