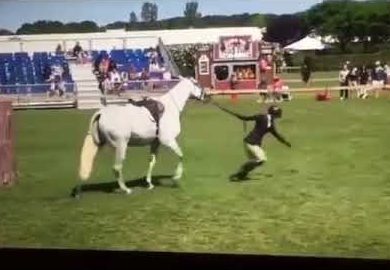 An amateur rider under investigation by US Equestrian (USEF) has apologised for her “unprofessional display of aggression and poor sportsmanship”.

Johnson & Johnson heiress Jazz Johnson-Merton shared a letter she wrote to USEF after the 1 September incident at Hampton Classic, which was caught on video (shown above).

The rider is seen falling from her horse Joe Cool after a fence in what is understood to be a 3’3” class. She keeps the reins and then it appears she tries to kick the horse, after which she leads it out of the ring at a trot.

On 21 September, USEF announced it would investigate. Two days later, Ms Johnson-Merton released her apology, which was published by top US equestrian magazine Chronicle of the Horse.

“One of the greatest pleasures in my life has been riding and showing horses, and I have enjoyed this hobby since I was a little girl,” it read.

“In the recent incident at the Hampton Classic, I had a very inappropriate emotional response to my horse’s behaviour, one that I have never had before. I was scared and angry, and reacted very badly. For that I am deeply sorry. My reaction was short lived, and immediately after I realised my mistake, I got back on to jump a schooling fence in order to finish the day on a trusting note with this horse.

“I can assure you that the apology that I gave to the stewards at the time and this plea to you now is genuine. I will never again exhibit this unprofessional display of aggression and poor sportsmanship.

“It pains me to see that I have brought negative attention to our sport, the sport that is most dear to me.

“USEF is in receipt of written reports and a video of the incident,” it added. “These reports and the video provide an account of Ms. Johnson-Merton’s actions following a fall from her horse during competition.

“USEF will conduct this investigation and any subsequent actions in accordance with its regulatory rules and procedures. USEF rules are in place to ensure that horse welfare and safety are protected at all times.”