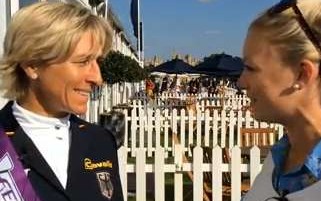 The series links the world’s six four-star horse trials and runs from Pau in the autumn until Burghley the following September.

Ingrid has had a stellar time over the past 12 months. She won Pau 2014 with Horseware Hale Bob, finished second at Badminton on the same horse, then won Luhmühlen on FRH Escada JS.

Her victory in the FEI Classics was assured after Luhmühlen as no one could overtake her at Burghley, but she came to the event to collect her prize and rode a dun hunt horse for the presentation.

“We riders don’t plan  for this — when I rode at Pau I didn’t expect to win, nor to do so well at Badminton or Luhmühlen,” she said. “It’s an honour to have this and wonderful to have the extra money to put back into the sport because competing is expensive. Thank you for having this series.”

Ingrid and the other Germans have been based at their team trainer Christopher Bartle’s Yorkshire Riding Centre for their final training ahead of the Longines FEI European Eventing Championships at Blair next week (10-13 September). She said she had had a “wonderful” two days at Burghley.

“Thank you for the invitation,” she added. “I feel I’m going away with a lot of joy and energy to be ready for my next adventure.”

Ingrid was selected for Blair with both FRH Escada JS and Horseware Hale Bob, but revealed today that she will ride Bob.

Michael Jung secured second in the FEI Classics with his victory at Burghley today. He won $30,000.