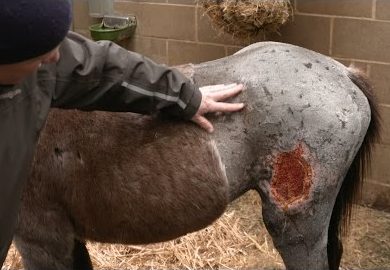 A colt found with “horrific” wounds has made a remarkable recovery.

The youngster, named Banjo, was discovered abandoned in a field in Croydon, south London, in April.

He had a 10cm open wound on his quarters, and others on his back legs.

“When I first saw Banjo he was very frightened and was hiding the other side of a deep ditch,” said World Horse Welfare field officer, Nick White.

“His injuries were so severe that he was unwilling to walk or move at all. His near hind leg was swollen, his flanks were red raw, sore, bleeding and showing signs of infection.

“There was barely enough for him to eat in the small section of the field where he stood and he was certainly unable to walk to where water was available.”

Banjo had no microchip and despite making enquiries in the local area, no owner could be found.

The youngster was removed from the field and taken to World Horse Welfare’s Hall Farm Rescue and Rehoming Centre in Norwich.

Once he arrived at Hall Farm, Banjo’s wounds were cleaned and examined by the team and vet, Andy Williamson.

“One of Banjo’s wounds was so deep that it had exposed the muscle tissue and certainly wasn’t the normal presentation of pressure sores which we often see,” said Mr Williamson.

“It is impossible to explain how he could have ended up with these terrible injuries and he must have been in a lot of pain.”

Six months later, he has made a “fantastic” recovery and has found a new home.

“I never thought that I would see this pony in such good condition with his wounds healed so well.

“Banjo is a happy, healthy, bright little pony with a sweet nature and his whole life ahead of him.”