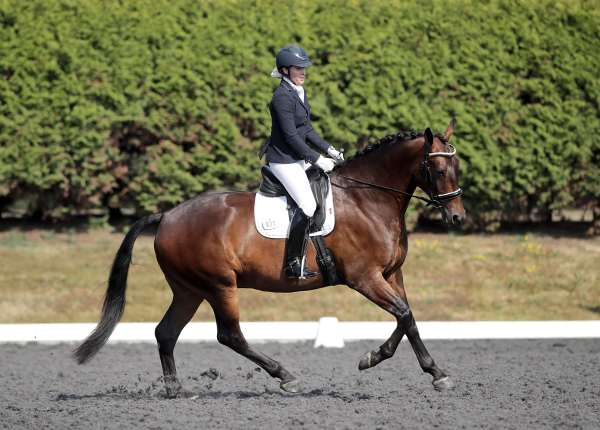 Horse & Hound Festival of Dressage’s Equestrian Surfaces novice champion Sarah Clarke faced a nervous wait to find out if she had done enough to take the title.

Sarah and her horse, Hiawatha La Perle, known as Hamlet, led overnight on a score of 70.21% and scored 68.31% in their second test, but with a number of title contenders drawn after her, the championship was by no means in the bag.

“It was really nerve wracking [waiting for the final scored to come through],” said Sarah. “I went early on and there were some really superb horse and rider combinations after me.”

Both Sarah and the bay gelding, by Negro, have been through a difficult few years. Sarah was diagnosed with a spinal fracture earlier this year and was only recently been given the green light to get back on board, while Hamlet was diagnosed with a rare bone cyst on his elbow last October. This has taken specialist help from vets at the University of Liverpool to treat.

“The fact that I can ride Hamlet after all the problems we have been through together, let alone come here, compete and then win a championship is just the most amazing feeling — I’m delighted,” she said.

Sarah figure skated competitively at national level until her early teens, when she took up riding.

“When I was around 12 I was learning my triples and started feeling some discomfort and learned that they were stress fractures,” she said.

“I had some new symptoms in the past 12 months and as soon as they saw my fractures they told me to stop riding – it was an unstable fracture in my spine and I wasn’t allowed to ride – a fall could be life-changing.

“It was pretty devastating having just brought my horse back into work after his own problems.

“After a month I got back in the saddle and luckily everything looks good around the fracture, although it won’t ever heal.”

Meet the Charlotte Cooper and her Connemara star, Kildromin Sir

Sarah credited the help of her sponsor, physiotherapist Ellen Colton of EquiPhysio, for getting her back in the saddle.

“All the areas that needed to be strong were weak so she has balanced me up and I’m much stronger and more secure in that area now,” she said.

“It’s massively improved my posture – before I was getting six for my riding and now I’m getting eights.”

Sarah, who trains with Stephen Clarke and Val Smyth, added she calls Hamlet a “Labra-pony” because of his laid-back, loving nature.

“He’s the nicest person and I can’t believe my luck,” she added.

“I’d love to take him up the levels but with his illness I take everyday as it comes.”

Gemma Parker and Louis rose from ninth place overnight to finish second, with Adelle Brabham and Astro in third.