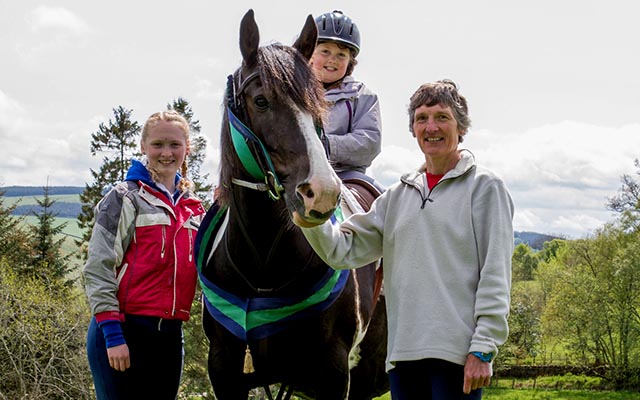 A rescue horse who was found “almost too weak to stand” has been named supreme champion by a welfare charity.

Cappuccino was one of more than 100 horses found near Exeter in 2010 struggling to survive on very little food and water.

Cappuccino as he was found

A vet examined all the horses and Cappuccino, aged three at the time, was taken to World Horse Welfare’s Glenda Spooner Farm rescue and rehoming centre.

He was rehomed two years ago by a family from Peebles in the Scottish Borders and has now been named World Horse Welfare’s Rehomed Horse of the Year 2016.

Cappuccino, far left, prior to his rescue

“Cappy was quite early in his education when we took him on but he has progressed amazingly well since we got him and only ever seeks to do his best for us,” said Susan Ridley.

“At the same time as learning himself, he has taught both of my children, Ruth aged 13 and Ruby aged nine, to ride.

“He loves the attention they give him and has always been absolutely faultless with both of them, never putting a foot wrong and taking care of them.

“Ruth has grown in confidence to ride him unaided and has even begun jumping him now whilst Ruby, who looks like a pea on a mountain on him, rides unaided with me walking alongside.”

The family also rehomed another pony — Windscott Wendy — from World Horse Welfare at the same time.

“[Cappy] is such a character and we love watching him play with his field mate, Wendy,” added Susan. “He is a real treasure.”

The competition is part of the charity’s Rehome a Horse Month, supported by Dodson & Horrell, which highlights equines looking for homes and celebrates those who have been successfully rehomed.

Ruby, who wrote part of Cappy’s winning entry, said he is a “true gentleman”.

“After his horrific past, he is still a strong and incredibly gifted horse in every way,” she said.

“He loves cantering and bucking in the field when he is very happy and loves to play tug of war with Wendy using tree branches.

“We have a very bright future for Cappy and we’re so lucky to have him.”