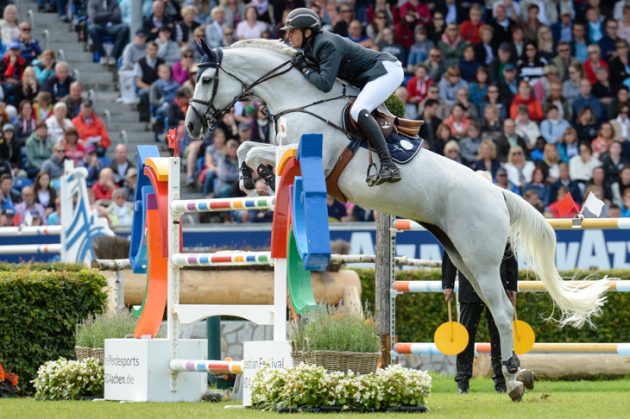 Partnering the 11-year-old mare Coree, Gregory shaved corners where possible to finish in a time of 46.6 seconds.

“I wanted to take a risk in the jump off, well I had to, and it certainly paid off — I’m very proud of her today,” said Gregory.

A sharp shower had made the grass surface slightly slippery for the jump off and spectators had their “hearts in their mouths” when the eventual runner-up, Portugal’s Luciana Diniz and Fit For Fun 13, slipped turning tight into the Mercedes-Benz oxer, but her willing mount picked up with ease. They secured second with a time of 47.4 seconds.

“We have a lot of trust between us,” added Luciana. “I always have a quiet confidence in her that we can do our best.”

Just four combinations made it a double clear following the second round over Frank Rothenberger’s sizeable track — with the quartet jumping off against the clock in front of the full-capacity grandstands.

Dutch rider Marc Houtzager (Sterrehof´s Calimero) produced the first clear during the jump off in a time of 53.66 seconds to finish third.

USA’s Laura Kraut was going great guns aboard the gutsy mare Zeremonie in the final round before knocking the final fence — the Rolex oxer — to settle for fourth.

Scott Brash was the solo rider from the British contingent in today’s grand prix aboard the 16-year-old Ursula XII (pictured, below).

The talented mare seemed much more her usual self today than during Friday’s Nations Cup when the pair racked up the penalties.

They had one down in the first round before pulling a flawless clear from the bag in the next round, but unfortunately it did not see them through to the final jump off.

The first round was influential and caught out some of the very best riders, with the top 18 going forward to the second round.

An imposing double at fence seven — an upright to a big oxer — saw the most penalties in the initial round. Germany’s Ludger Beerbaum (Chiara 222) fell foul here as did Swiss rider Steve Guerdat (Bianca).

Ireland’s Bertram Allen had an unlucky round with the grey stallion Hector Van D’Abdijhoeve, with a deluge of rain beginning halfway through their round. The 10-year-old was jumping well until his legs got in a bit of a muddle going over fence six — a substantial oxer — and Bertram called it a day.