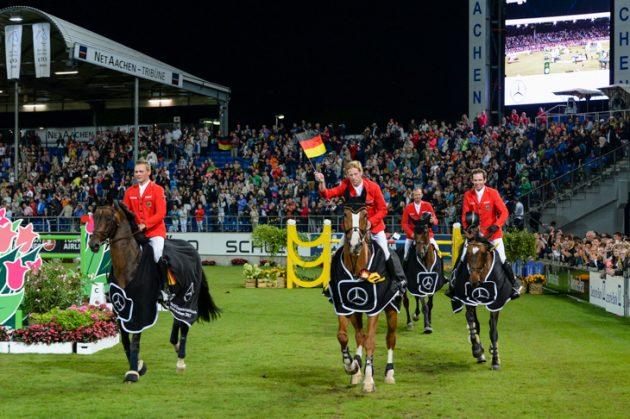 Germany repeated their impressive feat from last year, completing once again on a zero score in the Mercedes-Benz Nations Cup in Aachen tonight (20 July).

The Germans fielded a strong team made up of Marcus Ehning, Maurice Tebbel, Philipp Weishaupt and Marco Kutscher.

The win on home turf was secured thanks to double clears from Marcus (Pret A Tout), Philipp (LB Convall) and Maurice (Chaccos’ Son) — the latter young German rider was enjoyed his first experience on a Nations Cup team.

Marco, partnering Clenur, was the team’s drop score after picking up 12 penalties in the first round and four in the second.

The 11-year-old surprised his rider when refusing at the water jump at fence six in the initial round.

“He has jumped water many times before without a problem and it was the first time he has refused at water, so it was not expected at all,” explained Marco.

At just 23, Maurice outshone many of his older rivals by producing two foot-perfect rounds aboard the 10-year-old stallion.

“I only found I was riding in this Nations Cup two weeks ago and I was very excited, but a bit nervous — however, my horse did two perfect rounds so I was very happy,” added Maurice.

The runner-up spoils were shared between Switzerland and USA, who both completed on a total of eight penalties.

Both Laura Kraut and McLain Ward produced double clears for USA, while Steve Guerdat and Werner Muff also pulled it out of the bag for the Swiss team.

Disappointment for the Brits

There was disappointment in the British camp with penalties being racked up in both rounds and Guy Williams’ ride Titus sustaining a leg injury during the first round.

The pair were just fifth to go in the competition and first to go from the British riders, however, Titus put a foot in the water at fence six and did not look comfortable after that, before Guy pulled the 17-year-old up before the final fence.

“We think he may have strained a ligament,” confirmed the British Chef d’equipe Di Lampard. “He will be scanned tomorrow and we will know more.”

Nigel Coupe and the recent Hickstead Derby winner Golvers Hill (pictured, below) were best of the Brits with four penalties in the first round and eight in the second.

Scott Brash’s Ursula XII was having an off day, picking up a total 24 penalties and Robert Smith (Ilton) collected nine penalties in each round.

France were eliminated after only two of their riders, Roger Yves Bost and Kevin Staut, completed — Philippe Rozier retired his mount in the second round.