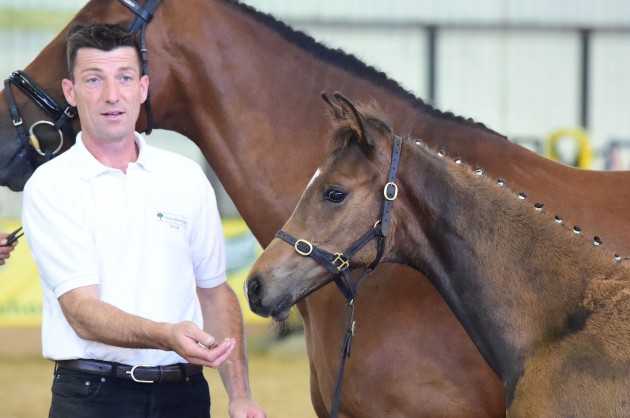 The final event of the 2015 Baileys/BEF Futurity took place for a second time at Solihull Riding Club (18 August).

Four dressage foals attained elite premiums and a selection of youngsters from across the disciplines and ages took home higher first premiums.

Colt foal, Woodlander Zinkwazi (Zack x Woodlander Wesuvio) headed the scores for the day with an elite premium in the dressage section of 9.45. Zinkwazi was bred and is owned by Alison Walton who now jointly owns Woodlander Farouche and also jointly bred along with Lynne Crowden, Zinkwazi’s dam, Woodlander Walk On The Wild Side.

Lynne said: “Zinkwazi is yet another example of the importance of breeding from good mare families. The strength of a good mare side can never be underestimated. The families have the depth to perform consistently at all ages and a good damline is also a significant factor in deciding on a stallion.”

Dark Valentine (see video top) (Debonair x Blue Hors Soprano) scored an elite premium of 9.30 at Solihull for Claire Lambert in the dressage section. The colt foal was born at Woodlander and produced for the Futurity by the stud.

Lynne Crowden said: “Claire is a first time breeder; what a way to start. She is absolutely delighted. Dark Valentine has an Oldenburg foal premium too who is just like his sire: well balanced, supple and light footed. Claire is now on a breeding mission after this great success!”

Following on from taking the top score of the day at Southview, Darren Mattia had cause for celebration when his and Lindsey Roberts’ filly foal, First Light (Furstenball x De Niro) took a dressage elite of 9.05. First Light is from the same damline as Darren’s elite scoring foal three days earlier at the Southview Futurity, Danieli (Dimaggo x Fidertanz).

Lindsey said: “First Light has a super damline, her dam is Dafila, bred by Charlie Hughes. Dafila is out of Apple by Fidertanz.”

Apple has bred several Futurity elite foals, including Dimaggika and Desire, who are both full siblings to Danieli who scored the top elite at Southview this year.

Lindsey continued: “First Light is a cracking filly, she will possibly be sold to the right home. I think whatever happens she will be produced for riding as she could be used to breed through embryo transfer.”

Another dressage foal owned and bred by Lindsey took the final elite score of the day at Solihull. Colt foal, Finisterre WD (Finest x Wolkentanz) scored an elite premium of 9.00.

Lindsey said: “Finisterre’s dam is Wolke Sieben. I bought her from Christian Heinrich and he is her first foal. She is a fabulous stamp of a mare and is in foal to Floriscount for 2016.”

Following a recent regional Hanoverian foal show, Finisterre WD has been sold to Peter Storr. Lindsey continued: “It is very exciting to have sold the colt to a top home. Every breeder of top competition horses wants them to go into professional hands so they can realise their full potential.”

Both First Light and Finisterre WD were born at Court Farm Stud and prepared for the Futurity by Darren Mattia. Lindsey added: “Darren is just so knowledgeable. He took four foals to the Futurity this year and they all went elite.”

Preci Spark Horses’ colt foal, Trefoil (Cevin Z x Treffry) scored a higher first premium of 8.92 in the eventing section. This grey colt is out of Vin and Liz Jones’ beautifully bred mare, Trego, who is by their late stallion, Treffry. Out of Welton Lady, Treffry was the full brother to four star eventer Treason. Treffry sadly died following an accident in the field as a four-year-old. This solid performance by Trefoil at Solihull followed a good day for Vin and Liz at Solihull 1 where three of their homebred three-year-olds scored higher first premiums.

Three-year-old colt, Sir Wilfred (Samba Hit III x Weltmeyer) headed his age group at Solihull with a higher first premium of 8.80 for his owner and breeder Daniel Henson from Kineton.

Daniel said: “This is the first time Sir Wilfred has been to the Futurity. He was graded as a two-year-old with the AES and is already broken and riding. Following a bit of a winter break, I will be looking forward to campaigning him in the young horse classes.”

Sir Wilfred is out of a state premium mare, St Pr St Winnipee. Daniel said: “She has bred quite a few top dressage horses. Jonathan Boswell’s horse Bo is out of her as is Steph Harrington’s, Lorna Doone. Sir Wilfred is Winnipee’s last son, she died after he was born. I have high hopes for Sir Wilfred.”

Solihull 2 rounded off two successful days at the Futurity for Debbie Green. Following on from her very near miss for an elite with Woodlander Waterloo at Solihull 1, Debbie celebrated another higher first premium, this time of 8.65 with Woodlander Sugar Pie (Supertramp x Florencio) as top two-year-old at Solihull 2. The filly, Sugar Pie was bred by Lynne Crowden and is now owned by Debbie who is very excited about the prospect of competing her alongside Waterloo. Sugar Pie’s dam is Elite Foxy Lady who is a half-sister to the highest 2015 Futurity scorer, Woodlander Woodstock.

Lynne said: “Sugar Pie was beautifully behaved at Solihull, she was a small bit tense and stiff though as she had a recent accident where she jumped out of her stable. She is a stunning young horse and Debbie has worked really hard with Carsten Sandrock to prepare her for the Futurity.”

Gail Kingswell Trueman’s yearling colt, Longacres Super Sonic (Samara Fly x Equador) was the highest scorer of his age group with a higher first premium of 8.55 in the showjumping section. He was presented at the Futurity by Ruth Walker and is out of Gail’s Equador mare, Trendy.