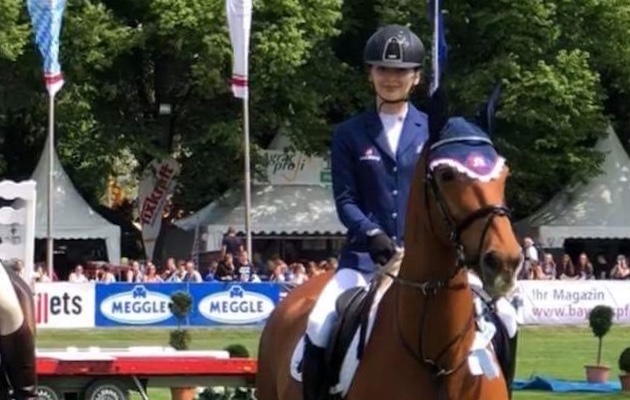 A British para rider kept a cool head when she accidentally jumped a 1.50m fence in a 90cm class.

Evie Toombes was riding as part of the British contingent at Pferd International München on 12 and 13 May.

The 16-year-old was enjoying a successful show, finishing third in a class on the first day of competition aboard her own High Offley Business Centre (“Daisy”).

On Saturday, the pair were competing in a 90cm speed class in the main arena. Evie tried to take a tight turn inside one of the CSI3* fences, but Daisy locked on to the huge upright and cleared it with ease.

“I was just so focused on my next fence because I was up on the clock,” said Evie.

“I picked her up and carried on, I thought Mum was going to tell me off when I came out the ring!

“I’ve been begging Mum to let me jump classes that are larger than 1m and I think even Daisy was trying to drop a hint.”

Evie’s mum, Caroline, told H&H they call the 15-year-old British-bred mare “Big Momma” because of how she looks after Evie.

“It’s like she said, ‘sit tight — I’ve got this’. The judge was fantastic as he didn’t [ring the] bell — he congratulated her when she finished despite her elimination for taking the wrong course.”

Evie with the judges after her eventful round

Evie has a form of spina bifida, which affects her lower leg strength, bladder and bowel. She has also had a nasal gastric tube for two years as her stomach struggles to process food.

She can only ride for short periods due to her condition, but despite this and the fact she is in constant pain, her motto is to “find a way, not an excuse”.

In 2017, she was presented with the inaugural Hannah Francis Award for courage and inspiration.

“Looking after Evie is like maintaining a Formula One car with constant work behind the scenes to achieve optimum performance,” added Caroline.

“We bought Daisy last year from some very good friends, Nik and Ellie Stevenson — I wouldn’t let Evie try her at first because I said she was too big, but thank god she did.

“It’s very tricky to find a suitable horse but it helps when they love their job so much.”

Evie Toombes, who was born with a form of spina bifida, makes "every effort" to compete for her Pony Club

“If Carlsberg made ponies, it would be him”

There are some competition days that we will never forget — for all the right or wrong reasons. Emma Shadbolt

Evie’s health is constantly monitored and they only received the final nod to go to Germany three days before they left.

They travelled with fellow grade III para rider Sarah Wicks, who finished second in Thursday’s class aboard her own Avalon Mill.

Caroline added that she is hopeful more para grades will be given the green light to compete at the show next year and encouraged riders to put themselves forwards for grading.

“There are possibly many current riders out there who don’t realise they may be eligible for para grading,” said Caroline.

“They can still jump in able-bodied British Showjumping classes, as Evie and many others do, but if they’re classified they can also use their additional aids, for example Evie is allowed a stick in each hand and capped stirrups if she needs them.

“I often hear ‘but I’m not disabled enough’, however it is about getting the help you may need.

“We only discovered this when a course builder saw Evie struggling at a show as she tired towards the end of a course.

“There are some wonderful competitions and opportunities to cater for para alongside standard classes.”

For more information, contact British Showjumping or the Riding for the Disabled Association.