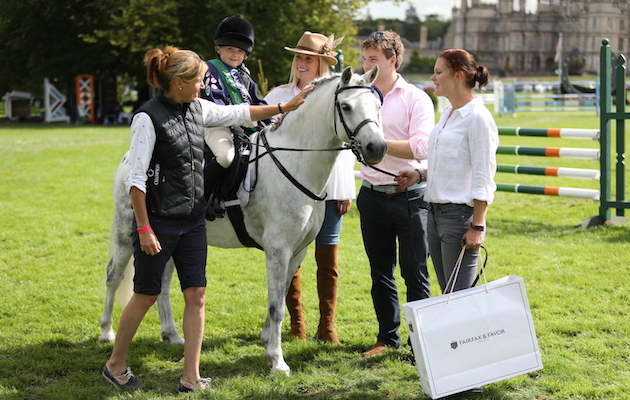 A rescued pony called Nutkin has been named this year’s “people’s choice rehomed superstar” following a parade of finalists at the Land Rover Burghley Horse Trials.

The public was asked to vote for the horse they felt should receive the accolade from a list of equines rehomed by World Horse Welfare, H&H’s charity of the year.

Six horse and ponies made it to the final at the prestigious venue, where the winner was announced by event rider Piggy French.

Piggy, who presented the winner with a sash and pair of Fairfax & Favor boots, said: “So much hard work from the World Horse Welfare has gone in to get them to this point. The six who got to the final are amazing and a credit to all those concerned.”

Winner Nutkin came into the charity’s care in 2009 as part of a group from a “rescue” centre where the owner was no longer able to care for them.

The 12.3hh Welsh pony was underweight, listless and suffering from a lice infestation.

After rehabilitation, the eight-year-old was backed and rehomed to a family where he was ridden by two young children. He later returned to World Horse Welfare and was rehomed again to Leah Fowler and her five-year-old daughter Darcy, who has formed an inseparable partnership with him. Together the pair compete at all Pony Club activities.

“It means so much to everyone who has looked after these ponies so well, Darcy had tears in her eyes, and it’s great to see. To see them so happy and loved is everything, they’ve got such life and they’re so wanted,” Piggy added.

“I’ve been on the back of one of them to do a lap of honour and that’s got my adrenaline up for the weekend!”

Leah described the pony as “cheeky” but a “superstar”.

“He is Darcy’s pony, that’s what I love about him, when he’s with me or anyone else he’s a jitterbug, but when he’s with Darcy he is a completely different character,” she said.

“He looks after her, enjoys her company and they just love each other – that’s what makes it so special. We’ve only had him since February, but they’re a match made in heaven.”

The announcement of the winner coincides with the start of World Horse Welfare’s annual rehome a horse month, September.

The charity has more than 1,700 horses and ponies in homes across the country, but there are always more looking to find a new partner or family where they can fulfil their potential.

The foal who hit headlines last year has

Pumphill Fandango was "underweight, neglected and miserable” when

Spike was emaciated and covered in lice when

“We are so grateful to the finalists who paraded at Burghley today but also to everyone who entered our 2017 Rehomed Horse of the Year competition throughout the four categories, with winners in the other three categories yet to be announced,” said the charity’s deputy chief executive, Tony Tyler

“These finalists are fantastic advocates for the many benefits of rehoming and also demonstrate the wide range of talents that our rehomed horses and ponies possess. I hope that anyone who has watched today’s parade or voted online will now be motivated to find out more about rehoming and who knows, they could be next year’s rehomed horse of the year superstars.”