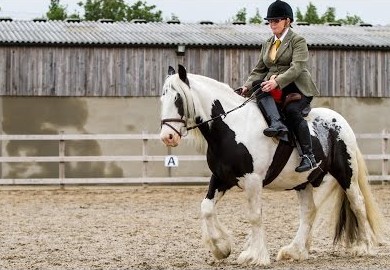 Today (30 September 2015) marks the end of World Horse Welfare's annual Rehome a Horse Month, and to celebrate, we meet Shanly. In just a year, the coloured pony — who was rehomed by Margaret Davies — has established himself as a side saddle star...

Shanly arrived at World Horse Welfare’s Glenda Spooner Farm Rescue and Rehoming Centre in Somerset in 2013 as his owner had become ill and was no longer able to take care of him.

He was just five years old and had very little training or experience, but his gentle nature and easy going character showed his fantastic potential for the future.

As part of its rehome a horse month, World Horse Welfare highlights six of its horses and ponies that are

Shanly’s rehomer Margaret Davies has always suffered from arthritis which often made it painful to ride in the conventional ‘astride’ way but she was keen that this wouldn’t stop her and so 25 years ago she began riding side saddle.

Margaret was looking for a horse to ride side saddle and wanted to rehome instead of buying because of the support you receive.

“I first met Shanly when I was asked to go and fetch him in from the field at World Horse Welfare,” remembers Margaret. “He came straight over to me and I instantly felt we had a connection.

“He came to live with me shortly after and we quickly built up a strong bond while continuing his training on the ground. Once I felt he was ready I had him professionally backed, first of all learning to carry a rider with a leg either side, then in December last year I had the honour of riding him side saddle for the first time.”

Why has Shanly taken to side saddle so well?

“He’s such a calm character that he’s just taken everything in his stride and whenever he is unsure of something he looks to me for reassurance – he knows that if I’m happy then he should be too!” says Margaret.

“I damaged my back in a car accident earlier this year so I sometimes become unbalanced when riding but Shanly senses straightaway if I’m a bit wobbly and will stop to let me right myself. He’ll only continue once he is sure that I’m safe and secure, which is amazing for such a young horse.

“The bonus of rehoming for me is knowing that if anything should happen to me or my circumstances change that Shanly could always go back to World Horse Welfare and would be very carefully found another loving home, plus I can phone up at any time for advice and support so I have full peace of mind.

“Shanly and I are looking forward to attending some more side saddle shows in the future and we’re also taking part in a side saddle fun ride in the next few weeks where everyone wears traditional dress and we have tea and cakes! Shanly is such a lovely character and I simply couldn’t imagine life without him.”

Find out more about rehoming a World Horse Welfare horse at rehoming.worldhorsewelfare.org