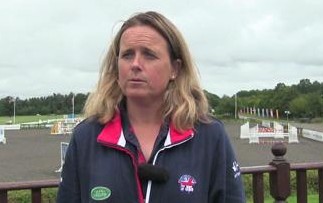 Ahead of the Europeans at Blair, Pippa Funnell talks to H&H about her ride Sandman 7, her thoughts on British breeding and the ups and downs of the sport

Pippa bought Sandman 7 from Germany on the strength of a video, after hearing about him through a previous employee who broke the horse in. As the youngest horse on the squad, what Sandman lacks in experience he certainly makes up for in consistency and boldness, having “answered all the questions so far”. He’s a special horse for Pippa, with the ownership split between some of “the most important people” in her life. In the video above, Pippa introduces Sandman, discusses whether she thinks he’s ready for a championship and shares her expectations for Blair.

Pippa also runs a phenomenally successful stud with husband William and importer Donal Barnwell. The Billy Stud has been established for twenty years, producing top quality eventers and showjumpers competing at the highest levels, with more coming up through the grades all the time – more than 35 horses at the recent Addington Young Horse Championships competed under the ‘Billy’ prefix. Successes include a Foxhunter champion, a top 10 finisher at Badminton, and a European team gold medallist.

Pippa is invested not only in young horses, but also in riders, helping to show the Billy Stud apprentices the correct ways to start and produce young horses from birth to brilliance.

Hear Pippa’s thoughts on British breeding and the importance of careful production below.

The ups and downs of the sport

Pippa’s career has not been without setbacks, particularly in recent years. Injuries to both Redesigned and Billy Beware before major championships have been devastating, causing her to miss out on both the 2012 Olympics and last year’s World Equestrian Games. With the news that Tom Jackson’s horse Waltham Fiddler’s Find has been withdrawn from Blair, Pippa reflects on how she has had to find the motivation to keep going, how it affects her when horses go wrong, and on giving support and advice to younger riders facing the disappointment for the first time.

After a 13 day equestrian extravaganza, the FEI European Championships in Aachen are over in a blur of tears, tension

Pippa’s first European Championship was Luhmuhlen in 1999, where she took double gold with Supreme Rock. From there, her career took off, culminating in a stellar year in 2003, when she became the first, and so far only, rider to win the Rolex Grand Slam of eventing; taking the Badminton, Burghley and Kentucky crowns consecutively. After Pippa and Supreme Rock defended their European titles in 2001, Pippa took individual bronze and team gold in 2003 with Walk On Star.

Pippa also counts one World and three Olympic medals among her collection – taking World team bronze at Jerez in 2002, Olympic team silver at both Sydney 2000 and Athens 2004, and adding an individual bronze at Athens. She was awarded her MBE in 2005 for services to equestrian sport.