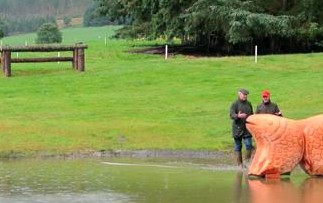 The cross-country course at the Longines FEI European Eventing Championships at Blair Castle has been designed by five-time Olympian and former individual European champion, Ian Stark.

Ian led Britain to a clean sweep of European championship medals in 1991, taking the individual title on Glenburnie. He was a frequent member of the British eventing team from 1984-2000, winning numerous team medals, plus individual Olympic and world silvers, as well as taking the Badminton title three times

Ian started course designing at Chatsworth where the Duchess of Devonshire and his predecessor Mike Etherington-Smith invited him to “have a go at the novice track”. Ian admits in an interview on the official Blair 2015 website that “until then, I hadn’t thought about it as a career, but I really enjoyed it and it took off from there”.

Now his course designing skills are in considerable demand and he’s responsible for courses at Bramham, Chatsworth, Floors Castle, Tattersalls in Ireland and several events in the USA.

He admits that that watching his courses being ridden “gets his heart rate going”, but says that he “loves to set riders challenges”, while dreading that a horse won’t understand the questions. “Sometimes I get up in the middle of the night and change a fence,” says Ian.

So what challenges has Ian set for the riders hoping to follow in his footsteps to become European eventing champion? We sent Olympic medallist and four-star winner Andrew Hoy up to Scotland to have a look at the course.

Andrew says: “My feeling is that this is a true championship course. There is a lot of jumping out there. It’s not just the jumping of the fences, the rider has to know their horse and have a feeling of how it’s going to work, how the horse can run up and down the hills and cope across the contours. I believe Ian has done a fantastic job.”

Read Andrew’s thoughts and ratings of every fence on the course, plus his thoughts on the challenges posed by the terrain in Horse & Hound’s European eventing championships preview issue, on sale Thursday 3 September.