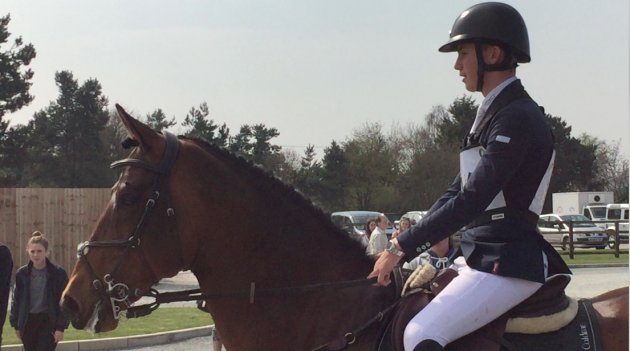 “Big Star’s such an icon, a big character — what a fantastic experience,” summed up 16-year-old Jack Whitaker after taking the reins on Nick Skelton’s 2016 Olympic gold medal-winning ride.

It’s not every day a teenager, albeit one of Great Britain’s most promising young riders, has the opportunity to ride an Olympic champion but Jack received a last-minute call-up to take the reins on Big Star at the Stallion AI Services and Twemlows Stud open day on Saturday (21 April) where some of the country’s leading stallions were being paraded.

“My dad [Michael Whitaker] was going to take Cassionato, but he was competing in Shanghai so I took Cassionato instead,” Jack told H&H. “Then John [Whitaker] couldn’t make it either so I rode Argento, too. I was then asked to ride one of the other stallions — it turned out to be Big Star, because unfortunately Nick was busy that weekend. It was a big day for me!”

So how did it feel to take the reins on the mighty Big Star?

“He felt fresh, he’s fairly lively!” said Jack. “Tullis [Matson] has been riding him while he’s at stud and he told me he could be a bit sharp, but what a horse. And the crowds were brilliant, so many people came out to see him.”

Jack did have one regret, however.

“I wasn’t allowed to jump Big Star, unfortunately — that would have been amazing,” said Jack, although he did pop over a few fences on both the grand prix-winning Argento and the 2016 Olympic contender Cassionato — who, like Big Star, is owned by Gary and Beverley Widdowson.

Jack’s trio of showjumping stallions were joined by the likes of Jaguar Mail, Murka’s Gem and Arko III, another former Nick Skelton ride, for this hugely popular annual event. Managing director of Stallion AI Services Tullis Matson even made the most dramatic of entrances — via parachute.

In this week’s magazine, out 19 April, don’t miss our special report from the British Dressage Winter Championships, plus full analysis from the Grand National — including expert comment, pictures and more. Read our report from the dressage and showjumping World Cup finals, and in this week’s ‘vet clinic’ we discuss the facts about fitness.