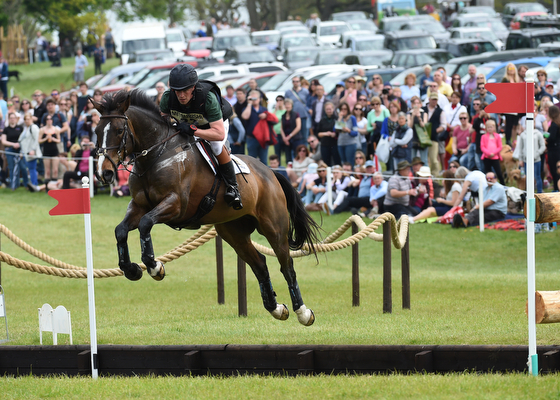 The atmosphere in the stables at the Mitsubishi Motors Badminton Horse Trials on the Saturday morning has an edge that is a caldron of emotion and nervous energy. Everyone is tense and on edge, from riders to grooms to owners and officials.

It has to have an effect on the horses and Bozzie is far from stupid and was more than aware. However, he still went out for some grass and a good roll first thing in the morning. I took advice from Jeanette Brakewell and walked the course for the final time. I had a plan of action in my head and it involved all the straight routes.

I set out feeling confident and Boz was jumping well, until we had a miscommunication (otherwise known as Simon messing it up slightly) at the Swindon Designer Outlet Mound, where my air jacket went off as I got left behind over the log on top of the mound and unavoidably caught him in the mouth. Unsurprisingly he took offence at that and stood bolt upright, so I felt really guilty. I found myself doing a Lone Ranger impression for a few seconds as we bounced up and down. Then I jumped the final element resembling a hot air balloon as my air jacket took a little while to deflate. Nevertheless, we were still clear.

We continued to the Mirage Pond where we had a run out at the narrow house on exit. It caused a lot of problems throughout the day. Things were not going to plan. I thought, “should I pull up? No! We’re at Badminton for goodness sake, you may never get this opportunity again, let’s at least try to complete.”

I made a pact with myself that I would nurse him round the rest and if we had another run out I would pull up. The old boy got better as we went along and although a little sticky into the lake, continued to complete the rest clear.

The course caused an inordinate amount of problems, and I was really concerned when we witnessed Jeanette’s horrible fall with Bella (Lets Dance). Thankfully they are both OK, albeit pretty sore. It was such a shame as they had gone so well until then.

It’s been an absolute honour to take my boy round Badminton and I’m very proud of him!