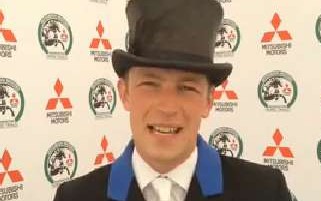 I would love to tell you that Bozzie (Cornacrew) and I worked the Badminton Horse Trials dressage arena with grace, style and elegance akin to Valegro. To the adoration of the enormous crowd, we slotted into a top ten placing and are in a position to give the master (and current leader), Michael Jung a run for his money.

However…I would be ever so slightly bending the truth. What actually happened is that Bozzie had the most wonderful time and was a little, shall we say excitable? He has been completely insane for the past few days, and although does not know where he is, is more than aware of what’s coming up.

He trotted me up, rather than me trot him up at the first horse inspection where he was incredibly strong which led to him not trotting very well and was subsequently held. The vet was fantastic and very helpful in making sure that he was ok and as such advising the ground jury, who subsequently passed him upon re-inspection. It was quite a worrying moment.

Attempting to do a dressage test on the equivalent of (as I’m told Carl Hester put it) a very well shaken bottle of lemonade, was interesting. He actually did a few nice pieces of work, but the adrenaline and excitement got the better of him today and we had one or two rather ‘jazzy’ moments.

Of course I would be lying if I said I was pleased with a score of 63.8 leaving us at the bottom of the pile after day one, but to be honest I’m just thrilled and honoured to be here.

If Bozzie wasn’t like that bottle of lemonade, he wouldn’t be the incredibly bold, brave and fantastic horse that I feel so confident in to tackle the most enormous and technically challenging cross-country course that Giuseppi della Chiesa has set for us this year. Without that wild and naughty side, Bozzie would be an average horse…but he’s not, so I would never be angry at his cheekiness, as without it he wouldn’t be him. I absolutely adore him and am just hopeful that he will enjoy Saturday as much as I think he will.