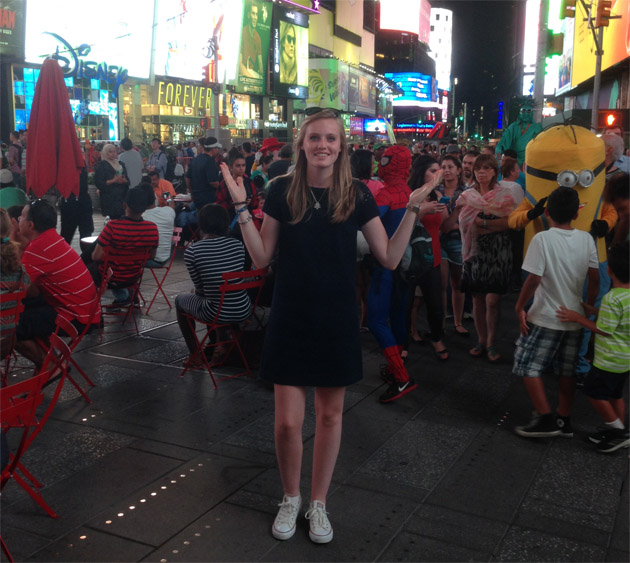 Since my last blog, there has been some big changes.

I have just returned from a fantastic family holiday in New York and New England. It was a great time to recuperate from an intense few months following the junior European championships and my AS Level exams. My brother had also taken his GCSE exams so both of us were holidaying as we awaited results. I received mine while we were away and fortunately I was really pleased with them so they didn’t ruin my time away!

On returning from holiday I decided that it was time to move from DL Dressage at Peasebrook Farm Stud where I was based with Lucy Cartwright and Daniel Bremner.

I have been based with them for four years, initially with my pony stallion Danger and now with Kaja and Santi.

It has been an amazing few years and I cannot thank them enough for all their support and guidance and of course their amazing management of my horses. It is very sad for me to leave them after such a long time but I know that we will always stay in touch and remain friends and they will always be a major part of my dressage career. I wish them all the success in the future and I will definitely see them at competitions.

I have moved to a yard much nearer home to allow me to progress my riding career while I will be doing my last year of A level exams before I commence a gap year.

This will be much easier for me because I no longer have a five hour round trip to ride my horses! The new yard has amazing facilities and both of my horses are very happy and settled there already after only a few weeks.

Santi is loving trotting and cantering along the all-weather hacking track (see video) which runs for two miles. At five-years-old he has really improved over the past few months. I have still been encouraging him to really push forwards as he is quite a lazy horse but he is starting to become more confident. The hacking is making him really enthusiastic about his work and it means I can do schooling work activating his hind leg with lots of transitions and develop his trust in a different context.

I still can’t believe how far he has come from when I first got the ride on him from Rebecca Hulme as an unrideable four-year-old to where he is now, just over a year later! I have entered him for competitions in the next few weeks and hopefully next year we will be contesting the six-year-old classes, so watch out!

Kaja has had a lovely couple of easy months after the Europeans to have a rest after the busy competition season, but I am now building her fitness back up and progressing our training.

Kaja and I have finished our last season as juniors so we are moving up into young riders which requires us to perform a prix st Georges (PSG) test. Therefore over the winter we will be working on our canter pirouettes which is still a work in progress. Kaja has a tendency to over-collect and then she loses her confidence and I have to be creative where in the school I perform them so that she doesn’t start to anticipate the movement but they are improving all the time.

Although the pirouettes aren’t quite established yet, I believe that this test will suit Kaja more than the junior test because it is more challenging and it will occupy her mind more.

I am looking forward to my lesson with Carl Hester in two weeks as he always has so many different techniques to use to reach the same end goal and Kaja usually requires a constant change in her work routine.

We will be doing some local competitions at PSG to build our confidence over the winter and to receive feedback from judges about which other parts of the test need more refinement. Then we will start our first campaign as a young rider combination next year.

I’m looking forward to competing again in the next few weeks back in my local Cheshire area but sadly it also means summer is nearly over and school begins again.